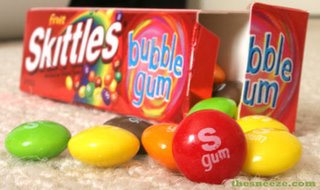 The Sneeze has a funny post about frustration and the old bait and switch. You know, when that thing you want A LOT isn't what it seems to be?

Except here, we're talking about gum that acts like food you don't get to swallow. Apparently, Skittles has a new gum out that looks and tastes like, well, Skittles, except that the gum version of Skittles, unlike the candy version, is for chewing and tossing in the garbage can rather than down your cakehole.

Turning candy into an exact replica of itself in gum form is a pretty stupid marketing idea. Unless the gum-that-tastes-like-
the-candy is half the price of the real box of candy, WTF? Get the candy and keep the goo off your shoe is what I say.