which web-point-0 will it be when the Internet does our work for us?

"There’s blasts from the past, and then there’s gas from your ass, auditory runs, where the shits just keep on coming." -- brian moffatt


Posted by Jeneane Sessum at 11:57 AM No comments:

Uh, This is Really Dumb.

Lots of people have already written about liking or hating it, which in and of itself is an American PR Idol like exercise in futility. Talking ABOUT instead of talking to or from.

WARN ME WHEN YOU ARE ABOUT TO MAKE ME OPEN A STINKING PDF.

A TEMPLATE IS A CONTAINER, NOT A CONVERSATION.

WHEN YOU HAVE A DUMB IDEA, AND WE ALL DO SOMETIMES, DON'T EXECUTE ON IT.

Ever neglect to open your aggrevator for, like, several days? Ever figure you might as well delete everything and start over because it's the world live web and you were absent that day?

It's easy to forget how dumb puppies are, or smart.

Little Sophie (yes, that's what she's called, despite the fact--or so i hear that the new Da Vinci Code movie boasts a Sophie in the lead role).

Trust me. She's no movie star.

She's doing pretty well except for our fence woes. We'll have to get a new fence in the back yard when we can afford to. It's one thing to have Bando (our six-year-old mutt) busting through the pickets and thickets as fast as George can foil him, and then CLIMB over when he can't get out the old fashioned way, but NOW he's teaching her to escape.

So much for keeping them down on the farm once they've seen Gay Paris!

Three neighbors in the last week have told me that Bando comes over and visits them in the morning. Two of the three give him breakfast. I wondered how he was gaining so much weight with all the escaping and running he does. Apparently he's running to the next nearest breakfast.

Tonight when I got home from the store, there was Bando in the drive way with little miss Sophie following along, fresh out from an escape run.

Did I mention she's cute though?


Posted by Jeneane Sessum at 11:34 PM No comments:

I gobbled up every word of Stowe's great post about having to fire one of his advisory capital clients because of holes in the no assholes rule -- a post that should be required reading for everyone who's signing on as an advisor to any Web 2.0 (or other) company. For me, Stowe's post was a signpost. That sign says: Girl, You Got a Lot to Learn.

First off, I didn't know there was a No Assholes Rule, because if I had known that, I would have invoked its special clauses two years ago. That having been said, I gleaned some great insight reading this post that reminded me how ignorant I am about what I'm saying yes to, even though I'm now signed on as an advisor to--I think 4?--webby cos.

It's not like I haven't done any research on my own mind you. In fact, the second time I said "yes" to becoming an advisor (without much thought as to what it meant except to offer to help out in exchange for some good karma -- warning, I don't give away the farm for good karma anymore), I did what any smart blogger would do. I called a longtime indie blog buddy and asked how this shit works.

He said, most of these companies have standard advisory agreements that are the same for each advisor--in other words, every advisor gets the same deal, which typically involves some equity in return for x amount of commitment/time, say 20 hours per month. So, he said, tell them you want their standard advisory agreement. If they say they don't have a standard agreement, tell them you want 20% better than the best deal they've given so far.

Of course I was also advised not to count on making a living -- or a late night trip to Walmart for diet coke -- as an advisor.

According to Stowe though, there's a lot more to know. And in reading his post, I came up with some questions I still have on how the typical Web 2.0 Advisor/Advisee relationship is structured (if there is a "typical" relationship):

1) Do you always document the advise/counsel/ideas you deliver? I would think that there should be a recommended process/format/flow for the regular exchange of ideas between advisors and advisees. (currently this is different for each of my advisees).

2) Sounds like Stowe typically does a front-end consulting gig to evaluate the company/offering and THEN signs on as an equity-based advisor if all signs are go? That's really smart. He's getting paid for his initial evaluation. I haven't done it that way. Yet.

3) Sounds like Stowe offers discounted consulting rates for clients who commit to longer-term, retainer contracts. I do this too. You commit to me and pay me on X date every Y weeks, on time, without drama or trauma, and I give you a break. Direct deposit knocks off more. Nothing like waiting for the Pony Express to trot up with a check. What other ways can we reward/incent clients (in general) for/to making it easy to get paid a specified amount at specific times?

4) I want this, from Stowe, on a poster. One that I can hang on the INSIDE of my eyelids:

"After all, once rule #1 is broken -- the "No Assholes" rule -- then there is no hope. People can learn to moderate their behavior, but never their basic psychological makeup. Once they start fucking you over, there is no end, because if they rationalize doing it once they will always be able to go through the same thinking process again and again."


THIS is the big rule of indie consulting in general. Once they indulge in fucking you over, they can't stop. And even when they do temporarily, all you have is a dry asshole. And that's just as bad.

5) Stowe's contract amendment also offers words to live--or at least work--by: "If the contract is terminated for any reason other than cause (and cause will be limited to felonies, or other really unambiguously bad acts, like breaking an NDA) then the one year stock grant will be accelerated, and whatever discount has been granted will be rescinded for all time expended since the outset of the contract."

SO, in other words, I think what this means is, YOU TURN INTO A DEMONSTRABLE ASSHOLE DURING OUR TIME TOGETHER, AND YOU OWE ME ASSHOLE RATES BACKDATED TO THE START OF OUR AGREEMENT. Damn, do I like that idea -- for all of my discounted-rate clients.

6) What's a one-year stock grant, and what does accelerating it mean?

I certainly look forward to Stowe packaging these "best practices in avoiding the worst clients" into something sharable. Like he says, most of the companies out there who are actually SEEKING our help are the product of good people who really want help and guidance on how to best nail down and achieve their objectives. I LOVE MY CLIENTS. They are doing cool things and want input from real people to make their product even better.

Then you have the assholes. ;-)


Posted by Jeneane Sessum at 11:50 PM No comments:

Putting the PR in PR and the Shirt on Your Back 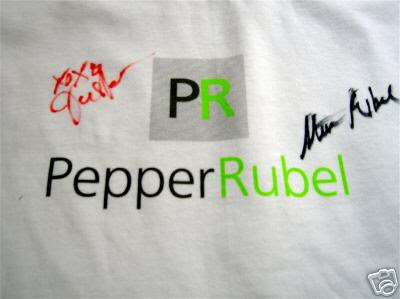 Mine doesn't have the signatures, but I love it just the same and am considering fed-exing it to PR brainchild Josh Hallett to get his autograph on mine for pushing this funfest forward. All I an say is that I watched with glee the day the PepperRubel site was 'uncovered'--God knows we can all use a little more fun around here. Glee, fun, joy, what have you.

YOU can wait for pics of mine, or bid on the Pepper+Rubel autographed version, now on ebay, and at printing time of this blog, carrying a high bid of $96.

A deal to be SURE.

Business Transformation and the Psyche of the "Wounded Creative"

It occurred to me today after spending some time in the company of a rapid-cycling highly-creative, bi-polar friend, that the current tech-meets-web2.0 business environment is becoming increasingly suited to the workstyle and general condition of the manic depressive.

It's PTSD meets work on hyperdrive. It's bursts of high-gear mania interspersed with periods of lying low and dropping out, agonizing loneliness, depression and isolation, followed by a reemergence and productive flurry of seemingly incongruous ramblings, which, online, translate into gems of innovation -- technology, products, features, business models, all of what we're doing here.

Survival of the fittest today? It's survival of the survivor. The walking wounded by nature of their trauma are gifted in adaptation; that very ability is key to their having survived at all.

I believe the sheer mass of traumatic memory online, converging across millions of individuals working creatively, is healing us.

At the same time, it is changing the nature of business to support us during that healing.

Or so says me.

in praise of the southern woman

it's the angle of the chin
set
just so, sweet drawl caresses
knee-weakened men
with keen assessments
of the dogwood's health
and the precise number of pines
taken down this season
to let the sun warm
gardens of tomatoes and herbs
set
against a backdrop:
Chinese maple shades
her ceramic bird bath.

it's the turn of a phrase
pleasant peaches with punch,
the southern woman never
surrenders, but wraps control
in a checkered napkin, folded triangle,
a homecoming to strangers and friends
set
in the blazing heat of summer.

Her voice is cool relief, beads of
sweat on Nanna's glass pitcher,
sweet tea with ice to quench his thirst.

The sins of her foremothers beckon,
remember her into forgiveness, witness
to her shortcomings,
she pours learning over lemon,
perspiring in a tall glass
on the wrought iron table
in the heat of the
mid-day sun.


Posted by Jeneane Sessum at 10:24 PM No comments:

Is it about money?

You're damn skippy it is:

...Together, they decided to stop talking about where the women bloggers are and create a place for women bloggers to read each other and be read by everyone. They built on the earlier efforts of women equally determined to amplify muted female voices such as Jeneane Sessum, the Atlanta founder of Blog Sisters.

"Blog Sisters and now BlogHer give women much improved visibility in a space that now has an economic component to it," Sessum said.


A GREAT article by uberreporter Jessica Guynn in the Contra Costa Times about women and blogging and BlogHer.

Ask questions now for the Tuesday roundtable with the BlogHers++. Cool!


Posted by Jeneane Sessum at 3:15 PM No comments: eyes by the head lemur
Posted by Jeneane Sessum at 10:01 AM 3 comments: