In other news, I passed two people on my mall walk today. That's a record!!!

Jenna said: "Mom, I think I see a muscle in one of your legs!"

Run and tell THAT.
Posted by Jeneane Sessum at 6:34 PM No comments:

Labels: happy birthday to me

You will not fricking believe what I'm into now...

ftw? yes, mall walking. Who knew that an entire counter culture existed within your suburban mall from before 8 a.m. until the "real" shoppers arrive at 10:00? I know!

Here's how it happened:

felt like death
decided to try one more time for life
started walking
decided to walk a 5K in the fall
got cold in Atlanta
looked for inside, closeby place to walk
went to mall
found 50 other people walking there
askd how long a lap around was
started walking
still walking.

That's pretty much it.

I passed my first elder mall walker today. I have been left in the dust by ladies who have to be approaching 100 and men with walkers. But not today; today was a mighy day. I passed one of them.

I'm comin' for them and they know it.

just wait.
Posted by Jeneane Sessum at 9:29 PM No comments:

It Takes an iVillage to Raise a Child

I once had a little baby girl. When she was just a few months old, some of you held her. On her 5th birthday, a boatload of you, my blog friends, filled our living room with boxes from this cool online store called amazon-dot-com. We still have the scooter, Denise Howell. When she got her tonsills out, you sent her get well emails. Frank Paynter you bought this-n-that from her fund raisers. Elaine Frankonis you made her a hat. Margaret B. Adam you took on the task of hunting for Nessie for her in Glasscow. When we took her to SXSW, you built lego houses with her, Halley Suitt -- and Auntie Kat Herding, you know all about the phone talks ending with, "Tell Jenna Uncle RageBoy says Hey." On Sept 30 she turns 13. And my Web of friends, you are the village it takes.
Posted by Jeneane Sessum at 9:47 PM No comments:

ze frank is always worth it.

I come back here because Ze Frank is always worth coming back for.

And some of Ze's favs.

As I just visited home, flashes of scenes from my childhood are just settling down. And school starts tomorrow for our middle-schooler. So many reminders of time's fleeting ways.
Posted by Jeneane Sessum at 1:53 PM No comments:

I just finished a bowl of pasta the size of which is against (probably) every health rule existing, including the old-fashioned food pyramid which I hear is all wrong now.

Mind you, I don't eat pasta very much anymore because I listen to what they say about carbs. Or I try to. Except I'm half Sicilian. And telling a Sicilian not to eat pasta to avoid carbs is like telling a beagle not to bark to avoid annoying the neighbors.

I compromised though. I put butter and grated cheese on it. Does avoiding tomatoes get me any points? Or the fact that I used low-carb noodles? With all that butter and cheese, they didn't taste low carb at all. And I hardly missed the red sauce.

People underestimate the power of butter.

But here's the real thing.

I saw my house today.

I mean I opened my eyes and SAW the condition of the house. Not just the minor points of disrepair, or even the major scuffs and holes and wear and tear. Not just the molded carpet edges or the spider webs (web is too gentle a word - brick-and-mortar maybe?).

I don't mean I saw a mess. I mean I witnessed the neurotic letting go of things, the dissociation from one's surroundings that happens when disrepair in the mind allows denial to obscure what the eyes see.

Did I mention 2009 was a Real Bitch? Yeah, it almost took us down. But we hung onto beams by bloody fingertips while the walls around us collapsed.

If that kind of thing continues, it can get you into big trouble. (I'm talking inpatient.)

Maybe it was Jenna's neighborhood friend, who followed us into the house for the first time today. I always find myself only seeing what "they" see when "they" first enter. "They" are strangers -- people who don't "not see" what I don't "not see."

But I saw. Everything. Everywhere.

It almost made me want to start picking up the mess. Except that every room seems to be a priority at once, and conflicting categories of messes confuse and confound me. How to get anything accomplished?

And that's why I ate a half of a box of pasta.

With butter and grated cheese. 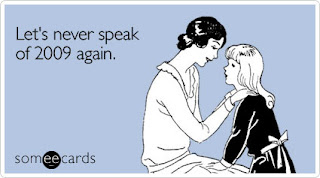 Posted by Jeneane Sessum at 2:19 AM No comments:

Seems like forever since I've been moved to post. It gets like that every now and again. So many Facebook gala events to attend, friend's need adding, people need help with their games, and besides, everything has been said already. You see your friends in chat. Twitter's faster, albeit vapid by comparison.

Before long, you find yourself having not blogged for a long time. And then if you're lucky, someone sends along some words of wisdom, some inspiring imagery, something that compells you back to the pixels from whence you came.

Such was the gift I received from the book of joe today, reminding me of the wondrous cultural diversity that makes the world go round.

And now? To the east my brothers to the east: 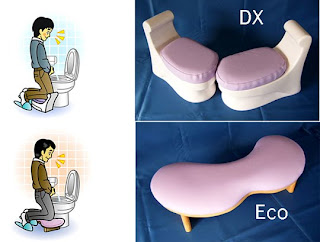 It's the "Pee Without Noise Stool." Because pee can be terribly loud.

My only question is, what's coming out of his face? Is that the sweat of sweet relief? Joy? Extra urine?

Are you glad I'm back or what!?

Posted by Jeneane Sessum at 10:57 PM No comments: