Oh my, what a great conference name: SoCon.

decides that any conference self-identified as "SoCon" and FREE has potential.

And officially OMG, it's in Atlanta, with an unconference in Kennesaw, which is quite nearly precisely and exactly where we live.

I just found out about it from j. brotherlove, who says he's going, along with Karsh, and I'll use any opportunity to connect with Their Smartnesses. I think Toby mentioned it too. Why isn't she leading a session? Grab her, people. I'll be happy to lead a dinner table discussion if the organizers get more people (and have more tables) than they do right now.

okay, well, like jbrolo, I don't think I can afford the SXSW trip this year -- not shortly before D-day, I mean Tax Day, but hanging out in Kennesaw at a SoCon freebee conference sounds good to me.

One bit of unsolicited advice--stretch it, okay? Add guys like j. brotherlove and Karsh and George. Or ask them who might be good to include -- geeks, designers, writers, artists, performers using social spaces online to connect or create. And I mean to talk or to contribute or to discuss or to eat with. Not lecture to.

Social Software is bigger than the same old "journalism" and "PR" and "podcasting" drone. Let's maybe encourage Atlanta to show off its major advantage over other cities at this conference -- its textures. Textures, context, inclusion, diversity, resilience -- not just the New Media 101 topics that have been done to death.

Of course, the devil is almost always in the details.

If I've learned anything from my 27 years of blogging and social tech, it's that.

George told me a couple of days ago that James Brown's body is at his South Carolina home while the family decides where exactly to put it. I see he was still this side of the earth on Tuesday. Anyone know if he's been laid to rest yet? 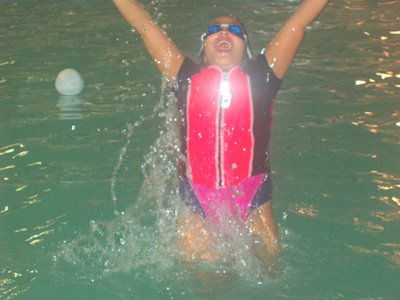 Look mom, no tonsils. Or adenoids either.
Posted by Jeneane Sessum at 12:15 AM


This album is powered by
BubbleShare

On Mothers and Daughters 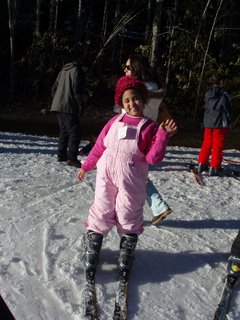 She stands on the bunny slope in her pink Wal-mart clearance-priced ski bib, sun burning her silhouette into my squinting eyes.

My little girl on skis.

I remember my first trip to the ski slope in western New York, about her age, when we couldn't afford lessons, so my brother tried to teach me until he got tired of helping me up. Time expired: Five minutes. The rest of the day I squirmed around on the cold snow-packed ground trying to right myself, poles akimbo, no idea what to do with the awkward things on my feet. My brother was long gone, onto bigger hills. I spent the rest of the day frustrated, in tears, mostly on my cold, wet behind.

Before I decided to spend the money on Jenna's lesson, I tried to teach her some of what I remembered, and since I wasn't on skis, I could help her up easier than my brother could me.

How interesting it is now that we're home, warm, dry, to think about how she interpreted my teaching -- "You're stressing me out, Mom!" "I'm TRYING!" "Never mind!" and other exaggerated reactions to what I thought were mild corrections and advice to keep her from careening into a barrel.

She was reduced to tears before I found someone to teach her, saying she was too "frustrated" to keep trying.

And it was, of course, All My Fault.

I had already seen her travel about eight feet without falling, so I knew she could do it. But something about Me As Mother instructing her wasn't working.

Everything I said was construed as criticism, even though I tried HARD to relate it as "Maybe try this," or "How about trying that." Okay, I might have lost my cool when she pulled me off my feet and I landed on my back. But overall, I was pretty easy going.

How interesting it was, then, when the 18-year-old ski instructor took Jenna under her wing, and she became a beginner skier inside of an hour.

How quickly she learned from someone other than ME, no fuss, no back-talking, no stress, no frustration. All of her beefs dissolved under the guidance of a non-mother, and she graduated to a 1+ beginner at the end of two hours.

She's getting to that age where she'll say, "Mom, stop, you're embarrassing me." I remember the first time I said it. And it reminds me. The push away, the I don't want you teaching/telling/taking/walking with/near me. You're too old. Besides, you're a Mother.

And in the next instant, a runaway five year old slams into her, knocks her down, and skis over her hand, and it's all me--"OHH Mom! OUCH!!!"

This is what age 9 is made of. 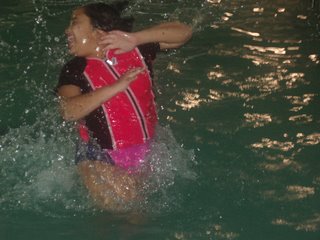 Half baby half grown.

It blows my mind and reminds me that the time with her near me is flying by. Skating, skiing, dancing, swimming, flying by.

What I say will mean less and less to her over time, until the mother-daughter tipping point when I hope she can make sense out of some of what I taught her after all.

It blows my mind to bits.

Posted by Jeneane Sessum at 5:30 PM

It's fascinating that I was the first to post the BubbleShare news, 30 minutes after the release hit the wire -- heck, you might even say I'm a little piece of the news -- and that Toby Bloomberg was the second to post -- but it took Matthew and Marc blogging it to make Techmeme.

I'm sure I'll wind up with a supporting role on Techmeme by linking to Matthew and Mark's posts.

UPDATE: After considering a point Gabe Rivera made in one of his (ahem) comments, I adjusted the headline of this post to the version I had right before I first published. I stand by my criticism over the lack of women in anchor positions on Techmeme and won't change a word of this post. But I should have published with the broader headline, because the issue reaches far beyond one website.

Hey, my homies at BubbleShare have been acquired by Kaboose! The Kaboose CEO said, "We are acquiring a seasoned and talented team that will advance our ability to release best-in-class Web 2.0 community services to our user base," which translates to, "Albert and the guys are amazing what they do, have created a kickass service -- and the families who use Kaboose are going to dig BubbleShare."

Techmeme and the rest can take care of the details. I just wanted to congratulate the guys and am happy to see one of my Web 2.0 babies graduate. ;-)

'cause i have some COOL pix to show you of the North Carolina mountains where my friend and I took Jenna skiing New Year's day, and nice mountain pictures Jenna took today on the drive home. We went to Cataloochee in Maggie Valley, NC. Here's the live webcam outside of the ski lodge. (hint: we're home, so we're not there.)

The drive up was interesting. Going through North Georgia always is. There was that one stop we made for gas where I found a white supremacist magazine on top of the real-estate guides for Habersham County. I took that one along so I could have some interesting bathroom reading. The bathroom (garbage) is where I left it too. How many Americans do you think have had complete lobotomies by now? No, really.

Anyway, we made the 3.5 hour drive without any problems, except my hyper-vigilanteism caused by reading the Neo Nazi rag I picked up along the way. That, combined with the six cups of coffee and fresh-garlic-coated wings we ate when we got there may have had something to do with my lack of sleep that night.

In the morning, Jenna had her first try on skis, complete with a lesson, and you have GOT to see the mini movies. C-u-t-e is one big hint. The battery is recharging tonight, so I'll try to get the pictures up in the morning, and a movie or two, so you can see jenna in the SNOW (which excited us to no end). In case you're wondering, I did NOT strap those chopsticks onto my feet--I hiked and trudged through the slush in good old fashioned boots like a good old fashioned Great Lake dweller, although I did have the pleasure of falling twice, since the man-made snow had turned mostly to ice, and since Jenna never did quite get the hang of getting up after falling on skis.

Things I learned since the last time I went skiing 38 years ago:
They have little moving sidewalk thingies now that take the kids up to the top of the bunny slope instead of having to side-step up or use a tow rope like we did.
To help kids learn how not to crash into barrels and grown ups, they they teach them how to "Pizza." That's what they call what we used to call the snowplow -- I guess because the triangle shape your skis make when you put the tips together looks like a piece of pizza. As in: "Good Pizza, Jenna!" (Yeah, that one took me a while.)
It hurts just as much to fall on your back without skis as it does with.
Lifting up a nine year old who can't get her balance can cause permanent neurological damage to the piker-up-ee.
Film--and pix--at 11. (or whenever the battery charges).

i love you, Google Alerts.

You have had a tough childhood,
you know how to be a thief and exploit others
but you stand up for society's cast-offs.