From Sheila Lennon, a simple elegant site that demystifies the most unhealthy foods on the planet by showing us what quadruple smothered, battered, and fried looks like: This is why you're fat.

Halley's gonna freak when I say so, but if you put this Oreo Donut in front of me, I'd be all up in that. 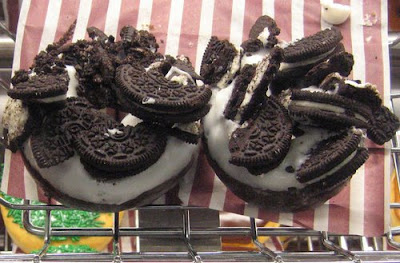 Back to the Future

I clicked my blogroll tonight for the first time in forever. You are still there, many of you. wood s. lot how long has it been? And you lead with a doosey. You always had doosies and you still do.

Don't miss it. Steve Lendman spills the beans on how markets really work (against us).

Why? Because the profits are enormous, in good and bad times, and when carried to extremes like now, Fitts calls it "pump(ing) and dump(ing) of the entire American economy," duping the public, fleecing trillions from them, and it's more than just "a process designed to wipe out the middle class. This is genocide (by other means) - a much more subtle and lethal version than ever before perpetrated by the scoundrels of our history texts."

The idea that equity prices reflect true value or that markets move randomly (up or down) is rubbish. They never have and more than ever don't now.

You start the summer and you figure: YAY! THE POOL!

Now, since we don't live in a swim-tennis community, but rather in a loose-basketballs-and-random-bikes-strewn-across-yards community, our neighborhood doesn't have a pool. Or a tennis court. Or a clubhouse. Or a neighborhood association. I know, stop painting the rosy picture.

As a result of our pool-less-ness, every summer I search for a swim-tennis subdivision that takes outside members so that we have somewhere to swim, fry our skin, and basically wear out the child so we need less melatonin nightly.

For the last 4 years we've joined the same pool, and for the last two of those years, we've seen what apparently is a rite of summer in the south: pool fights.

Tonight's brawl was between two fathers who had a total of six kids at the pool who had been friends for 15 years. Niceeee.

Apparently the wives were at the crux of the conflict, and then apparently one of the husbands said something about the other husband's wife's crux, and fists began flying.

I don't know how many grown-up fights you've seen, but until my pool days, I think I had only seen a couple of bar brawls, the result of falling in love with a bassist who sometimes played in clubs where people sometimes drank even more than pool people do.

Today's fisticuffs was broken up by several other large dad-men at the pool, and the drunker of the two offenders and his wife and children were escorted out by the large dad-men. Some pool goers stayed on after the brawl; others decided it was a good time to take their leave.

I think I did a little of both.

Meanwhile, I had three girls there (mine and her 2 friends), who got to witness the brawl in all its splendor, leaving me with the task of explaining wtf.

They didn't say, "Mom/Miss Jeneane wtf?" but it was written all over their faces.

I explained that some of those involved had been drinking large quantities of alcohol, and things got out of control, but that those people were gone now and we were ok.

And thinking that was lame, I asked the President of the Board at the pool what happened, who said: "Too much booze, too much sun."

What won't leave me alone tonight are the faces of the children who watched the fists connect, the ones whose dads were involved, the ones who were dragged out of the pool and stuffed into the car smack dab in the middle of what was, three minutes before, a fun day.

But that's how it goes with pool fights.

The not so funny thing is, when we were driving out of the subdivision, I saw the offending family outside at their house. The kids skateboarding, the parents were sitting relaxed on the front setps laughing, talking to another neighbor.

Everything was back to normal. Nothing to see here. Don't ask don't tell. They'll all live to swim another day.

Labels: donna summers, fisticuffs, no fool, pool, summertime and the living is easy