21 years ago today i said "I do." There are no words for where we've been, what we've seen, endured, come to understand, and how all of that has changed us. All of these many years, they are understood not through language, but through color, shape, and sound. I remember them through my senses in tapestry, patterns, music.

I will see you soon.

there is a season

Blogging may be sporadic, yet again, as Jenna and I may be traveling down to Florida. And school starts Monday. And I'm not sure which end is up.

George and his brother are in central Florida with their mother, who is on life support. She is 86. And very stubborn. It is long days, long nights. One day, one step, one thing at a time.

Head to Shelley's to find out about a must-do wordpress update. NOW! (And to learn the new code word for getting off your ass and doing something quick.)

I think the Dept. of Homeland Security should add this level above terror level red: HighestOMGBBQ! - reserved for an actual emergency, not one made up to keep the population in check.

you've probably seen it, cause i'm always the last to know

but this image mosaic generator is pretty nifty. it uses flickr images (wonder how it gets away with such) stating they are the respective work of their owners to mosaic-ize an image of your choosing. just upload an image and click the button--it's really cool to see how it grabs images by hue to fill in your image. coolio. 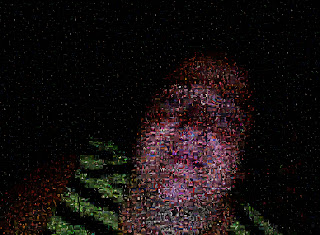 sometimes it's a good idea.

for instance, all of the wise ass comments i could make about this, you know like some jerk who would say, "great idea but don't light the wrong end!" and stuff like that, I'm not going to make those stupid comments. NO i will not make them. because this serious. and it's not something to joke around about. remember that.

Madame Levy has it. Lee died surrounded by loved ones. George and I were reflecting that "These Boots" was our favorite song when we were kids. Lee's talent inspired more than one generation in his lifetime; it will inspire many to come.

state of the state of mind

i haven't blogged this much since the kathy sierra debacle. there are a lot of reasons for that. chief among them: i (like anyone who has been around here 6 years) have some anger at this space. i have some fear about being misunderstood, which causes me to sometimes second guess my gut as a writer. that, friends, sucks. however, i'm getting over it--hold off on the flowers and sympathy cards if you would.

in the long list of things since march, i've had some threats from people i don't trust, and i don't take that shit lightly. i have some boredom with a blogworld that too closely resembles the mainstream we came here to avoid. i also have a suitcase full of anxiety that i'm at least willing to own up to, and as most of you know i've had health issues, surgery, recovery (doing great--THANK YOU ALL), then lots of work, followed by not enough work, followed by work picking up again.

And I have a new Mac bought for me by my readers and blog friends--thank you thank you thank you--that makes being here more fun than it is work. the act of kindness restored in me what was some pretty beaten down faith in this little experiment we're engaged in. the notes, the emails, the energy asking me to keep on.

People sometimes ask me, how i feel about what went down and how it went down. There is no single feeling for being swept up in a tide of openness and originality turned car wreck turned tornado turned wasteland.

Pissed? yeah, ok. more at first than i am now. i am actually more optimistic about people than i have ever been. and i have so many blessings i can't count them all. these are things i realize. they are the switch i am learning to manually flip when the lights go out for too long.

I was also thinking just tonight, the way i see it, most of the people involved in the aforementioned shitstorm -- not everyone, but most -- did the right thing. That's a good thing. an important thing.

we are only human beings. we misread one another. we dance like shy school children and then drunken sailors. we can be jerks and heroes--sometimes in the same instant. we are not so predictable.

But, I don't know if i'm so optimistic about 'blogging'. The blogworld is a place where Loren Feldmen's supposed to be funny and I'm an accomplice to a federal crime? that's wrong on so many counts i don't have enough fingers and toes to do the math.

But it's not over. Not by a long shot.

Everything cycles. Video killed the radio star. We've gotta keep at it. Keep at it with me. Don't stop. not this day. not this week. kay?

Labels: no tags were harmed in the making of this post

if it were funny, it would be funny

But it's not funny. Dick. 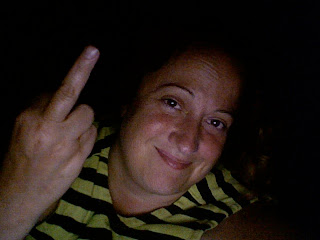