Labels: Pitch it or Bitch it 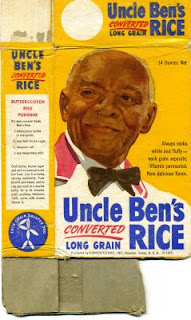 "Who's your Benjamin now?"
--Uncle Ben

Labels: hell in a handbasket

I'll See Your Chickens and Raise You a Great Whore

Well, Hillary's non-church-goin' ways may come in handy after all as her two front-running opponents scramble to cover up their spiritual kins' view of the "Truth."

The NYT reports on Texas preacher Hagee, who would make no friend of the Pope I'll tell you, what with the Pontiff at the head of the Great Whore, which, in Hagee's view, has done little more than spill Jewish blood, from the Crusades to the Holocaust. Tit for Tat I always say.

Mr. Hagee, it’s true, did not blame the American government for concocting AIDS. But he did say that God created Hurricane Katrina to punish New Orleans for its sins, particularly a scheduled 'homosexual parade there on the Monday that Katrina came.'

If God's grave wasn't empty, he'd be turning over in it.

It appears presidential-librarian-in-waiting George Bush is blaming soaring U.S. food prices on..... today's winner is India! Does the U.S. really deserve anything less from the man we let steal the top job in the country?

“There are 350 million people in India who are classified as middle class. That’s bigger than America. Their middle class is larger than our entire population,” observed Mr Bush. ‘‘And when you start getting wealth, you start demanding better nutrition and better food. And so demand is high, and that causes the price to go up.”

Yes, according to Dingleberry-in-Chief, the fact that a box of Triscuits at Kroger now costs nearly $4.00 has nothing to do with the U.S.'s Trillions of dollars in deficit (courtesy of an unwinable war). Nor is it related to the falling value of the U.S. dollar that will soon be cheaper to use for wiping purposes than the toilet paper it buys.

The problem, as Bush sees it, is that India has a lot of people who aren't poor.

Gone out of his mind? Heh. That Bush. He has all the answers.