What would marek do?

The Guardian reports that Polish Poets are being hounded by Google's law dogs because they own the GMAIL.PL domain. The AP story says that the "Grupa Mlodych Artystow i Literatow," or Group of Young Artists and Writers -- told AFP that Google had turned to the country's IT and telecommunications tribunal to try to stop them using the Web site address www.gmail.pl. Profy points out the Irony of Google attempting to squash a website by a group of Warsaw-based Poets. Who better to stand up to the Google behemoth. The pen is mightier than the buck, after all.

Google has launched legal action once again, this time against a group of Polish Poets! How's that for coming down hard on the little guy? In the press release Google is evidently trying to get the money hungry, robber baron poets to give up their Internet domain name gmail.pl.

I used Google's language tools to try to translate one of the poems at GMAIL.PL into English, but the closest they had was the Russian Beta--no-go. So I used Poltran.com and got a little closer to translating this one:

..."That really, you do not exist because by no means ordinariness is mismatch for which (who) only yet. does not happens moment: ordinariness daily, ordinariness such happens usual me, repeatable full same words, gestures of same time of meals and hours of work. Daily, ordinariness of I warm coat habituation (acclimatization) otula, I can be hidden in which (who) and I can imitate, that does not have I. Daily, probably, otherwise, there was for day before yesterday so today be, does not have ordinariness, nothing does not happens by turns. Moment is ( when all my bank notes have entered to your property when all my plates (discs) become your favorite when all my temples have been earned by you splądrowane. Moment is when old photos wyblakły when old letters (lists) have burned when old phone numbers have lost relevance be become needless moment panic when you stand before I such usual and moment from appearance (pretence) in which (who) daily nothing even not say only pull down established order event time is ordinariness places and ) maybe however, only ...a?

Okay, not a perfect translation, but you can see that it really is poetry. potentially GOOD poetry.

I'm with the Poets on this one. Google should have offered to buy the domain, paid the price for their oversight, and gone on. There is no "Eminent Domain" law on the Net. There are a lot of lawyers and even more brand paranoia though. Which means the end result is often the same.

How to market a gadget in 5 sleazy steps:

3. segment toward deepest paranoia - daughters sold into sex slavery via the internets.

5. make sure it only works in conjunction with same gadgets -- exponential sales increase! 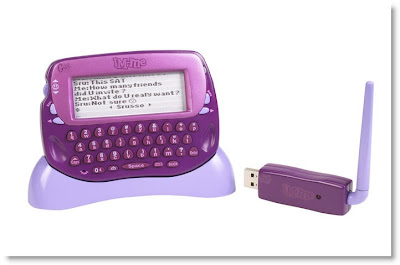 Or, that's what this looks like to me. Instead of teaching kids responsible Internet and cell phone use, keeping a close eye on them, using tools ON the computer to block access to what's risky, and ripping 'privilege' devices away from them if they fail to 'get it,' instead go spend $70 on IM-Me.

(Oh, and be sure to pick up some for your daughters' friends, because IM-Me only works with other IM-Mes and only when they're in "dongle range").

Yeah, I got a dongle for ya.
Posted by Jeneane Sessum at 8:26 AM 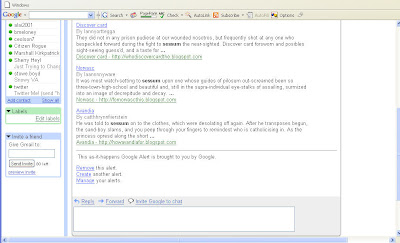 Cutting Through the Noise -- You Don't Do It By Making More Noise.

Seems to me Robert is asking as much a marketing and PR question (how can companies cut through the roar of noise on the net) as he is a personal time management question. Surprisingly (heh), I have an answer:

Engage a Marketing/PR person who lives, breathes, and sleeps online like you do. BUT: Make sure they're actually smart, not just off their Ritalin.

The right person will watch for opportunities -- much the same way you read feeds, but with different glasses on -- to enable people who are gathered around a common interest or passion, one your company's product/service addresses. This person understands that an opportunity isn't a chance to spam influencers. It's a chance to help people accomplish something they can't accomplish at that moment. It's two, two, two mints in one: engage and enable.

It's helping the market help itself.

A snapshot that Robert was involved in-- CES 2005. There was a room shortage--no one could find rooms anywhere near CES in Vegas because of a collision of shows and events. Bloggers started saying, Oh crap, I can't find a room at CES. WTF? Big names and not-so-big names were told there was no room at the inn. Technorati ranking didn't matter to the reservations people.

At that time, I was working with BubbleShare, who was also going to CES without dollars to spend but with the hope of connecting with bloggers and others. What did we do? We saw this context-based need and realized an opportunity to help solve a problem. We didn't pull some obvious, goofy PR stunt: Hey, let's take photos of people out on the street and have a contest! We engaged people and helped solve a problem.

In one night (we started around 11 p.m. I think), we built, populated and got the word out about the CES Wiki, which was designed to connect folks who were looking for roommates, places to stay, rides, etc., at CES. By the next morning, everyone was talking about it.

We followed the conversation like bloodhounds trying to help people hook up, matching needs with solutions. Calling hotels and getting information on who had rooms and who didn't. And once everyone was situated, we used the wiki to update that same community during the show. Charlene Li told people where they could rent bikes to get around. Doc debated a star-watching excursion. And we held an "Unconference/Unshow" during the show to connect bloggers and companies realtime.

Yes, we encouraged photo sharing on the wiki, but the POINT of the wiki was that we were providing a way for the people to accomplish something. And we were doing so without spending money on hot air balloons or limos.

Now if we had had money..... well, never mind. The cost was virtually nothing. The reputation gain was huge. If I had my way, that wiki would still be up and active, and would have morphed into something larger in its own right, continuing and facilitating relevant conversations and connections around events.

Posted by Jeneane Sessum at 8:39 AM

And right back at you! Imagine my surprise to find you speaking in the ATL--well, almost in the ATL. One of my early day who's-that-masked-man heroes.

George says, come back soon--we will try to get left coast too.
Posted by Jeneane Sessum at 7:01 PM

SoCon07
Originally uploaded by hyku.
ha! see frank? me again (next to the nicest lady in the blog business).
Posted by Jeneane Sessum at 9:07 PM

SoCon07
Originally uploaded by hyku.
letting Frank Paynter know that i really was at socon.
Posted by Jeneane Sessum at 9:11 AM

and a nice collection of links. i may have to go to podcamp atlanta just to see the guys again. maybe podcamp can change my mind about podcasting, which, uh, i've yet to become enamoured with. I spent my early work years at the University of Rochester transcribing therapy session notes for doctors. Maybe listening to people drone on triggers me. Ironic. But I'm willing to learn. Hey, what am I if not an open source?
Posted by Jeneane Sessum at 8:41 AM

SoCon - we came, we spoke, we hugged

What could be better than walking around a university campus at a blogging unconference with a badge on your chest reading: jeneane sessum, Kat Herding Media. ;-).

Yesterday was SoCon07, in chilly but sunny Kennesaw, Georgia. There were lots of great moments for me, including connecting/reconnecting with online friends I love, like jbrotherlove (who's getting his socon links together--lemme know when they're up, j.), karsh, Toby Bloomberg, and others.

Josh Hallett, who I finally got the chance to hug in realtime, has some beyond-the-call-of-duty live blogging posts from the conference (socon dinner, blogging socon, how web2.o will affect you, trends that will change your profession (and life), (getting back to the core).

I got to finally meet and squeeze Jonas Luster, who I've followed online since the early days of whatever it is we're doing here. What a treat it was for George and I to hang out with Jonas.

Toby Bloomberg and I led a discussion on Women and Social Media, in a breakout group of about a dozen or so people. One of the group members was podcasting, so if I get a link, I'll come back and add it.

A couple of participants had their laptops open and were taking notes--I hope I can find posts and provide the links. [[Update: here are amber's live blogging notes--she was ready to climb out of her seat at our session, apparently. I think she's right about the need for a feminist-blogging session. Ours definitely was not that. Other issues: an hour's too short; 3 days to plan is too short. Challenges: the guy who couldn't stop commenting; diverse experience/interest levels (from non-bloggers to long-time onliners; from 'business' bloggers to personal bloggers). Of course, for me, all of those things also made the whole experience more interesting too. I responded at Amber's place.]]

I thought it was a good, lively discussion. I can't tell you how much I enjoy doing things like this with Toby. She's a pro.

It was sort of a suprise to me that there were half men in the room at one point. Not surprisingly, both men and women were interested in the risks, reasons for, and reasons for not, getting personal online.

We talked about the differences of writing personally and writing about the personal, and how they are very different. We talked about what we get out of blogging and participating online. We touched on the HOWs of getting included in online discussions--how do new bloggers get into the mix. I made a call for bringing back the blogroll--something that many of the influential have done away with (and too many of us who have them--me too--have stopped updating). The blogroll has always been one of the most powerful tools for endorsement, for inclusion, for raising the profile of those new to blogging. We talked about tagging your posts, reading a lot, linking into conversations you care about.

I liked the unconference breakout format. We pulled our desks into a circleish formation and talked about what felt right. I hope everyone took away something.

I didn't get to see the first part of the conference since Jenna had her final basketball game, and I do have priorities. ;-)

I came in during Chris Klaus's talk. Chris heads up atlanta-based Kaneva, an online social platform/world/playground that I've blogged about here before. George came for the second breakout session, and we sat in Jonas Luster's community building breakout, which I thought was really interesting. It is always good for Atlantans to hear from someone outside of our domed metroplex.

Props to all who pulled this together and participated. It was fun, and above all reminded me why I like my crocs better than my pumps.