Women's Weblog of the Year 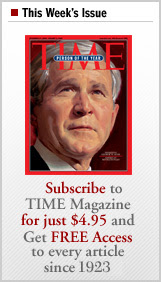 Well, okay, maybe it's not exactly like that, but still, we over at blog sisters are feeling pretty good about Time Magazine's Person of the Year issue giving blog sisters the linky love for women's blogging.

Our blogroll is extensive, and even more than the passers-by who read the writing on the site, I am glad they'll have access to so many women's blogs off of our blogroll.

In all of the years blog sisters has been humming along, we've never been recognized--not even nominated--in any of the "same-old-crowd" weblog award extravaganzas. So good. Time's nod is recognition enough.

Men may have taken the lead in the early (read: geeky) days of blogging, but that's not the case now. According to a survey of more than 4 million blogs by Perseus Development, 56% were created by women. More bad news for the boys: men are more likely than women to abandon their blog once it's created. Call blogging a 21st century room of one's own.
GO TO: blogsisters.blogspot.com

In other blog sisters' news, The Crone has stepped down from her job as President and Registrar of blog sisters. Elaine is finding there isn't enough time in the day to keep up, a sentiment I can certainly relate to. We all say thanks for keeping us organized over the years. I know Elaine will still write over on blog sisters when she gets a chance.

In the mean time, she's forwarded me about 15 emails of women wanting to join--which I will get to in time.

An announcement is forthcoming on Elaines replacement. I know you're on pins and needles.

I hate to post, since I'm enjoying the google adsense Pig-related advertisements so much. I never knew that one could purchase a 400-pig-per-hour slaughterhouse setup so easily. With a click of the mouse, you too could be covered in pig intestines.

Another reason I didn't post yesterday -- did I the day before? -- it's all a blur -- is that we have ALL had the stomach flu, which began with me, I think on Friday, but it might have been Thursday, what's today? at 2 in the morning with the dreaded throw-ups, followed by the other end, a relentless combo that lasted for 12 hours, at which time fever, dehydration, and delirium took over, until 24 hours had elapsed and I was speaking in tongues.

I made it through and by sometime over the weekend--was it late Saturday night? felt pretty good, or maybe it was Sunday, no it had to be Saturday--Jenna began her 16 hour throw-up extravaganza, the likes of which I hadn't seen before--we counted 23 times, and that was with a phenegren suppository (go google adsense!) and that took us into this morning, at which time I heard George making the now-familiar groaning sounds.

He is currently burning up with fever.

So, the moral of the story is, WASH YOUR HANDS!

--The Mistress of Puke