Jon Garfunkel, who attended BLOJO Cred at Berkman, has written up a thorough summary on some of the touchier issues around the conference. He polled some of the excluded and included some thoughts from critic-skeptics, I think in part so that there would be a centralized record of what some of the outlying blog voices were talking about when the initial criticism of the conference began.

Jon did a lot of work compiling his analysis, and it shows. While I agree with his assumption that the lack of diversity didn't affect the outcome or the tenor of the conference, I maintain my dismay: That's the point. That by not assembling a more diverse group both the high priests of blogdom and high priests of journalism were safe in securing their desired positioning without challenge from their own parishioners. Each desired to win the coveted credibility grail from the other. In the end, no one got to take the trophy home.

As for the rest of us? Well, we were right, and a hell of a lot more funny, but that doesn't count for much in closed circles.

Jon concludes his essay by describing what happens when a homogeneous group tries to achieve something meaningful:

"Getting a group of fifty in a conference room tilts the conversation too much. There are just too many affluent men (and too few women) strutting their own stuff without anybody to challenge their assertions. I know; I was there; I offered the challenges. I got support from the people on the outside looking in, but the insiders had little response, and the good folks in academia who should have led the questioning had checked their skepticism at the door."


And while the conference apparently failed to achieve any accord or agreement (the best news I'd heard come out of the Berkman Center in a long time), Jon concludes that perhaps we can do a better job at talking with the elite without attacking them:

There's still work for the readers to do, and perhaps this is what Dan Gillmor meant to say. Outsider participants need to figure out ways to get the insiders' attention without dropping into personal attacks.


There are moments when I think that having civil discourse over heated matters helps. But I've found that usually it doesn't. There is a certain demographic among the blog elite that doesn't hear unless you get in their face. I'm willing to keep doing it. Partly for me and partly for those more civil than I who otherwise don't get heard when posting opinions of dissent. The ones who email me saying, "That rocked what you said on your blog."

If three or four years of fine writing and thinking -- of humor and horror, of piss and passion -- on the part of the excluded aren't enough to get the "insider's attention," then it's just not going to happen.

Because what they don't seem to realize is that they are quickly positioning themselves as the "business as usual" crowd of blogdom and journalism, the institutionalized among the amateurs. They are becoming what they came here to diss.

The CEOs of Blogging are no sooner going to forgo their $50,000 in "pocket change" than I am going to stop pointing out how silly they look in their fancy-dancy ties.

I think we don't need their attention. We simply need to keep talking to one another, and when they do and say ridiculous things within the hallowed halls of conferenceland, attempting to define standards and ethics for an "unspace" like the blogworld, then we keep talking to each other.

Yah! I like seeing his name up there in my google ads.

In other news, I ditched the old sidekick finally. I initially bought an HP IPAQ 6315, thinking that it would be way more relevant to me than it was. I hated it. What's with making a Pocket PC with a detachable keyboard and not making a case that houses said keyboard. Well, key"board" is probably best described as hyperbole. I should call it an itsybitsyletterbox.

Anyway, I spent a total of 10 hours on T-Mobile support calls trying to 1) Get the IPAQ do some simple tasks like say give me the email I actually WANTED, not deliver them as SMS's every two seconds. Then when I gave up and returned the IPAQ, I was left with residual data "FEATURES!" on my sidekick that insisted on delivering an Instant Message every single time I got an email in either of my two email accounts. I can tell you precisely how many SMS email alerts fill up your sidekick SIM: 39. I get 39 in a half hour to an hour on a typical workday. WHich means, in order to keep my phone SOMEWHAT functional, I had to delete messages every 45 minutes. 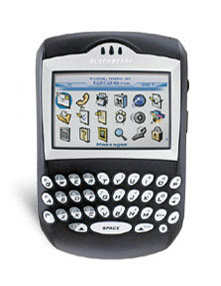 Sisters CONTINUE Doing It For Themselves...

Blog Sisters has a new look and vision, thanks to the edgey eye and keen talent of Andrea and Rox. Just in time for our anniversary in February.

Blessings all.
Posted by Jeneane Sessum at 9:56 PM 1 comment:

I have not the time, for I am currently in customer aquisition and retention mode. i.e., busy selling and doing work.

You won't believe how well it's going. Just wait until we have a web site. I hear people use that internet to check out companies before they do business with them. 'magine that. And the whole time I thought it was just about p0rn.

So, for now, I'll spark your interest with our name:

don't go rushing there yet.

this is a pre-launch message.

I'm me and I approved this message.
Posted by Jeneane Sessum at 5:17 PM 1 comment:

A powerful global conversation [[-->punctuated by hyperlinks, not business cards]] has begun. Through the Internet [[-->not one-off exclusionary institution-centered events]], people are discovering and inventing new ways to share relevant knowledge with blinding speed. As a direct result, markets are getting smarter—-and getting smarter faster than most companies [[-->even popular media conglomerates, and that's good]].

The sky is open to the stars. Clouds roll over us night and day. Oceans rise and fall. Whatever you may have heard, this is our world, our place to be. Whatever you've been told, our flags fly free. Our heart goes on forever. People of Earth, remember.

with thanks to Cluetrain.

Pick a buddy and read to one another! 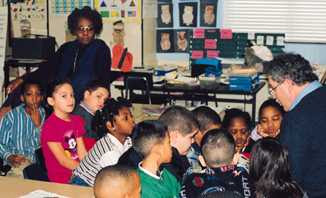 Above: Doc reads Cluetrain to a class of third graders at his neighborhood elementary school
Posted by Jeneane Sessum at 1:57 PM 2 comments:

How homogeneous Can One Room Be?

The frightening thing is, they have no idea how ridiculous they look to the rest of the world. For some of them, the world is what they report on--their oyster. Little brown bodies floating in the sea and such. They are tolerant in their own country. They will send money to others.

For others of them, not all of them of course, the world looks much like Boston, a white-friendly little jewel in the tolerant blue state area of the U.S.A. They don't like W. They might even vote for Barack Obama. But they don't think anything's odd about a room full of so many people just like them discussing ethics and standards for an online world they assume as much privilege over as their offline neighborhoods.

I wouldn't care if they were getting together to share recipes or tips on selecting the right tie for navy blue pants. I'd even be glad if they got together to work on how to be better writers.

But I do care that they were discussing "credibility," "ethics," and "standards" about a space that is as much mine, ours, as it is theirs. A space that they can help ruin because of shared "trust" among an alarmingly homogeneous group.

What's not to trust--they don't look like criminals, they're educated, they're sitting around a table at Harvard for the love of God. Certainly they are who they say they are.

But it's easier, isn't it, to fix this space, to examine it, to quantify, verify, validate, and ejaculate it into a neat and tidy transcript. Baby, it don't work that way.

How many bloggers of color did you invite? How many reporters/journalists of color? I'm making assumptions here--I better be careful--like I'm always so careful. It wouldn't be ethical to be careless. Yes, so, I just want to know.

"It's about business models," one of them said. It's about a "shared vocabulary." It's about "a shift from analog to digital." It's about changing "the mainstream press' ideas about journalism."

I am glad that it had a happy ending though:

We're certainly a long way from a shared set of principles, or a code of ethics, or even an understanding of how they could come about.


Well thank the Blue Eyed Jesus for that.