Been There. Appreciate That.

Jenna had a four-day stay in Children's Hospital of Atlanta a few years ago when she got a staph infection from a cat bite. The people there were amazing, the care was wonderful, the staff was reassuring, and the Dr.'s figured out what was wrong and got our child well.

Even with the exorbitant insurance premium we were paying at that time, we still ended up owing a couple thousand in deductible $, which Children's caringly and respectfully worked with us on until what we could pay was affordable for us.

If your city isn't listed in this contest for a free new hospital playroom from Colgate, please vote for Atlanta's Children's Hospital.

It only takes 2 clicks to vote.

Thank you for your consideration. Use the Internets wisely.
Posted by Jeneane Sessum at 12:34 PM No comments: 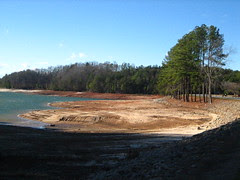 Posted by Jeneane Sessum at 10:55 PM No comments:

Labels: gnats are biting and the water is low, summertime and the living is easy

Sprinkle, Swim, Just don't bail out of town this summer.

yesterday, a reversal of a covertly-made law between the army corps of engineers and Georgia's shady government that allowed us NOT TO SEND 25% of lake Lanier's water to Alabama and Florida was struck down. In other words, not only do we not have much water left, but we now have to pony up a quarter of the droplets we've been hogging and send it to our neighbors downstream.

TODAY sonny perdue our esteemed fuckgovernorasshole announced his new water conservation measures, which in effect RELAX the conservation measures he had in place to make sure we didn't all dry up and die. So, this summer, we can now fill our pools and even water our lawns (no sprinklers tho kids), and resume business as usual. Don't worry, be happy!

Can someone -- anyone -- explain this to me?

Is this a spin attempt to do damage control on yesterday's "Georgia has to give back water to Alabama and Florida" story so that people won't run away come May? Or is this a 'screw you' to Georgia's neighbors saying, you can have your 25% after we use it all?

Or is Sonny playing the Rapture Card, figuring by the time it matters, it won't matter?

discuss.
Posted by Jeneane Sessum at 10:36 PM No comments:

In a surprise twist after a chaotic Super Tuesday, Sen. Barack Obama (D-Ill.) passed Sen. Hillary Rodham Clinton (D-N.Y.) in network tallies of the number of delegates the candidates racked up last night.

The Obama camp projects topping Clinton by nine delegates, 845 to 836.

NBC News, which is projecting delegates based on the Democratic Party's complex formula, figures Obama will wind up with 840 to 849 delegates, versus 829 to 838 for Clinton.

Clinton was portrayed in many news accounts as the night’s big winner, but Obama’s campaign says he wound up with a higher total where it really counts — the delegates who will choose the party’s nominee at this summer’s Democratic convention.

With the delegate count still under way, NBC News said Obama appears to have won around 840 delegates in yesterday’s contests, while Clinton earned about 830 — “give or take a few,” Tim Russert, the network’s Washington bureau chief, said on the “Today” show.

The running totals for the two, which includes previous contests and the party officials known as “superdelegates,” are only about 70 delegates apart, Russert said.

The bottom line is that the two are virtually tied.

Posted by Jeneane Sessum at 10:45 AM No comments:

It was a creed written into the founding documents that declared the destiny of a nation.

It was whispered by slaves and abolitionists as they blazed a trail toward freedom.

It was sung by immigrants as they struck out from distant shores and pioneers who pushed westward against an unforgiving wilderness.

It was the call of workers who organized; women who reached for the ballots; a President who chose the moon as our new frontier; and a King who took us to the mountaintop and pointed the way to the Promised Land.

Yes we can to justice and equality.

Yes we can to opportunity and prosperity.

Yes we can heal this nation.

Yes we can repair this world.

We know the battle ahead will be long, but always remember that no matter what obstacles stand in our way, nothing can stand in the way of the power of millions of voices calling for change.

We have been told we cannot do this by a chorus of cynics...they will only grow louder and more dissonant ........... We've been asked to pause for a reality check. We've been warned against offering the people of this nation false hope.

But in the unlikely story that is America, there has never been anything false about hope.

Now the hopes of the little girl who goes to a crumbling school in Dillon are the same as the dreams of the boy who learns on the streets of LA; we will remember that there is something happening in America; that we are not as divided as our politics suggests; that we are one people; we are one nation; and together, we will begin the next great chapter in the American story with three words that will ring from coast to coast; from sea to shining sea --

Posted by Jeneane Sessum at 12:37 PM No comments:

I voted today for the first time in 28 years.

I was so far removed from the political system that, despite my proactive registration at the library in December 2007, I fell between the cracks. Apparently, my registration never made it from the librarian's hands into the system, however that's supposed to work. When I looked online to find my polling site, there was no record of me. When I went to the nearest polling place this morning to vote, I got confirmation that I didn't exist.

The polling officials let me vote provisionally, but I had to drive down to the board of elections to tell them my story if I wanted a chance for my vote to count.

But when I got there, they told me I was indeed not in the system, but to go to a different polling place and fill out another provisional ballot, in order for my vote to count. I asked if I shouldn't go get my provisional ballot and bring it to the right place, but that's not allowed. So, I drove another 20 minutes to the new polling place.

When I got there, they explained that no, I couldn't vote there because I had filled out the ballot at the other polling place. They were sorry, but the lady at the elections office had given me the wrong instructions.

I figure even though it took me 2 hours to vote, if you spread that across 28 years, it's really not so bad. I just hope it counts.

The next step in the process is somehow proving that I submitted the registration to the library in December, which I did (see post here: http://allied.blogspot.com/2008/01/i-have-not-voted-in-27-years.html, wherein I mention that I had registered a couple weeks prior to the date of my Jan 3 post. The last day to register was January 7.

I wonder if my blog can count as proof of registration prior to the deadline?

When I asked the poll workers what could have happened to my registration, two different times they mentioned that they had been having some problems with people who registered at the libraries and at the DMV. That rather sucks considering that's probably how most people who aren't registered GET registered.

Now if I were a bona fide conspiracy theorist, I might have suspected that the White County librarian noticed I was registering as a Democrat and put my registration in the bin marked Bartow County Dump instead of Board of Elections.

But you know me - I don't have a suspicous bone in my body.

Posted by Jeneane Sessum at 10:44 PM No comments: