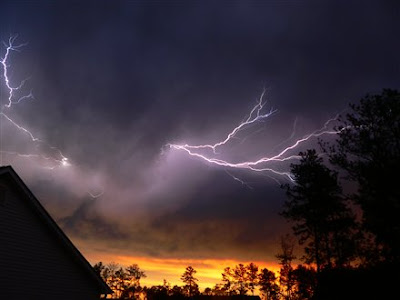 A magnificent storm swung southward through Atlanta this evening. Not the pop-up kind, but the kind that rolls in angry, cracks open the sky, blue-black clouds turning lush green leaves sliver as branches thrash against the wind.

Before it bullied its way into Cobb and Cherokee counties, the day was mostly sunny, and I took Jenna and a friend to the pool to cool off. A few times during the day we heard distant thunder, and as parents, we huddled to perform a crude risk-benefit analysis on the possibility of a direct lightning strike vs pulling all the kids out of the pool without fall-back activities or any real desire to leave poolside on the part of the adults. Most of the time we kept our eyes skyward as the kids swam.

There's that window, when you're pretty sure it's safe because it hasn't thundered for ten minutes and the sun is out, yet suspicious clouds dot the sky. Everyone has a story about the bolt that came out of nowhere and killed a whole pool full of people. It must be a southern thing. Sort of like the kids who die by falling into snowbanks in the north.

Weather can be unforgiving.

Since I was there by myself in charge of two girls, I made the decision that if they were in the pool, I was going to be in the pool. If they were out, I would be out.

As for in-water reasoning, I figured, if a bolt decided to electrify the pool, I damn well wouldn't want to be around to suffer through the guilt and broken heart that would be my legacy. Likewise, I didn't want to be in the pool while they were at the picnic table snacking only to have the stray-death-bolt-of-lightning strike my raft. Then I would miss my daughter growing up and leave her to mature without a mother. Not the ideal option.

The all-in or all-out of the pool plan worked well, though it took away from the relaxation part of my master plan. Thankfully, we made it out alive just as the serious weather began to move in.

When the sky opened, pregnant storm clouds mixed their blackness with over-watered lawns turning everything that eerie tornado-brewing shade of pea green.

As we were driving Jenna's friend home, we got stuck between the pool and her house in the worst of the weather and found shelter in a friend's basement. My friend was out of town, but her nervous Golden Retriever was overjoyed for the company. He tried to climb inside of me with every smack of thunder.

The power flickered, cable gave out, and I was glad for my blackberry tuned into live Doppler radar on the local news station.

As the girls played Scrabble in the basement, I went upstairs to call home and tell George we were out of the storm.

I decided to lie back and let go, and began thinking about something I had read last night, something about kids and stealing. No no, not about *my* kid, but about me as a kid.

It's no secret, my Esteemed Readers that I shoplifted as a kid.

I think I was about 12 when I went pro, which lasted a couple of years. Those were easier days, no scanners or detectors. You had two way mirrors, and you had store detectives. Neither a match for me. Innocent brown eyes and a too-sweet smile, I had the perfect cover. It was never very hard for me to slip one shirt under another in a fitting room, books down the back of my pants, candy up the sleeve, or makeup in zippered pockets. A mood ring here, a magazine there.

Shoplifting is the art of distraction. Left hand reaches for a bottle of shampoo, lean a little closer, read the label, right hand slips the eyeliner up the coat sleeve. (This was upstate New York. You always had a coat on.)

But don’t think badly of me. This was just a phase. You had phases too, right? Looking for attention was what I always heard from adults who talked about kids who shoplifted, often in front of me, while I blinked in dismay. I said, “Wow, kids do that?” but I thought, “I’m not looking for attention. I’m looking for a really cool shirt.”

Of course I posted about that part of my life in 2002, before the days of Social Media. Now I have a reputation to keep up. (sneer). Anyway what I read in the article about stealing that gave me pause was this:

"It is hypothesized that subconsciously Atypical Theft Offenders are very angry and steal because they want someone else to feel the unfair loss that they are feeling. Since this is a subconscious act in partnership with deep subconscious anger (Cupchik,1997)."

It was about the loss on the other side.

It wasn't about having; it was about another's not having.

It was about an unconscious need to gain some measure of control, real or imagined, over the loss that would be forever. About controlling loss through taking.

It was a way of passing my loss on, of saying, "Please, the burden of my loss is so very heavy that I can't manage it on my own - can you lose something with me?"

In losing something can you carry part of my loss for me?

It was about a six-year-old girl whose world stood still in a second that lasted six months,

It wasn't about what I took from them; it was about the displacement of my own empty shelf.

And this is what I was thinking as the rain beat against the storm door, the dog nudged the cuff of my jeans, and the children giggled downstairs playing Scrabble, safe, out of the storm.

Posted by Jeneane Sessum at 11:19 PM No comments:

redux.
Posted by Jeneane Sessum at 12:33 AM No comments:

I only wish I could have Stealth-Discoed Joi

"Money is lonely - It always goes where other money is."