Not since the 1950s, when metro Atlanta's population was under a million people (now close to five million) has the man-made container of Atlanta's major water supply, Lake Lanier, been this low:

Lake Lanier on Monday night dropped to its lowest point since the reservoir was constructed in the 1950s.

The old record of 1,052.66 was set in December 1981, also during a severe drought. The next year, an El Nino weather pattern pumped monsoon-like rains into the metro region and refilled the lake within six months.

That's unlikely to happen this time. The opposite weather pattern is in effect, La Nina, which typically creates a warmer, drier winter here.

Since spring 2006, Lanier has been depleted by the relentless drought and by releases of its water downstream to keep power plants operating and federally protected mussels alive.

Federal biologists on Friday agreed to let the U.S. Army Corps of Engineers keep more water in Lanier. That will buy some time for more than 3 million metro Atlantans who rely on the lake for drinking water. But it won't fill the lake; that could take three years of normal rainfall.

The problem is not so much the drought, as the local media and political machine would like you to believe, as it is poor infrastructure planning and water management.

Until about 4 weeks ago, my friend who lives near the Governor's Mansion in Buckhead said she saw the sprinklers on daily. She even called to inquire why, during a watering ban, was the Governor's mansion watering. The response was that the Governor's residence is exempt from those bans.

The Governor's PR people obviously got busy and turned OFF the sprinklers once the nation started watching Atlanta dry up while Sonny prayed. I can't imagine how much the lush grounds take in terms of water for maintenance. Hell, Sonny's meter doesn't even work, so who would know?

Water bills obtained under Georgia's Open Records Act show zero water consumption at the barracks for 15 months in 2005 and 2006. An official at the Georgia Building Authority, which pays the water bills, confirmed Friday the meter was broken after the AJC contacted the state agency about it.

Atlanta's no stranger to trouble. We moved here 13 years ago, right before the Olympics came to Atlanta. Massive construction ensued. With all of that Olympic construction, should someone not thought to dig a few more reservoirs?

Most docks are dry. Only one of the corps' 104 boat ramps is still usable.

Yet Lanier contains more water than two other, smaller federal reservoirs downstream. The corps, which operates the lake, increasingly has relied on Lanier to help meet downstream needs. 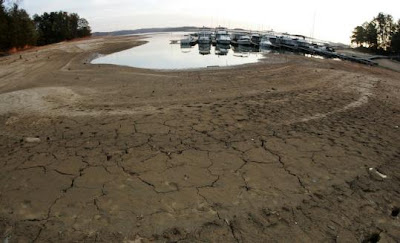 And get ready, Atlanta:

With metro Atlanta facing its worst water crisis, the U.S. Fish and Wildlife Service on Friday agreed to a plan to reduce the water flowing out of Lake Lanier into Florida, keeping more for drinking supplies here.

But whatever relief came from that decision, the rising anxiety over the historic drought was evident in two emergency planning meetings called by federal and state officials in Atlanta.

Among the day's developments:

> The U.S. Department of Energy summoned Southeastern power company officials —- including Southern Co., Duke Energy and the Tennessee Valley Authority —- to discuss how much water they must have to operate and what to do if there's not enough to operate electric-generating plants.

> A newly appointed state Drought Response Unified Command met to formulate contingency plans for communities that run out of water. The command includes the heads of the state's Environmental Protection Division, Georgia Emergency Management Agency, the Georgia Environmental Facilities Authority and the Division of Public Health.

> The U.S. Army Corps of Engineers acknowledged that it has not developed a drought plan that might have allowed it to manage the Lake Lanier water crisis better. The corps blamed the long years of tri-state water wars litigation among Georgia, Florida and Alabama.

To me this means:

1) If you haven't already done so, STOP DRINKING THE WATER HERE. Eventually it will make you sick.

2) Have firewood--if the utils go down this winter, it's gonna be cold.