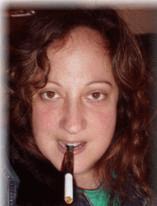 July 4th will be my FOUR YEAR anniversary of quitting smoking. Holy Cow! Most of you who read me were there when I quit. I languished over having to quit for the first two years. Every day, every mile. OH how I missed my best friends. OH how I fiddled and gnashed teeth in those early days.

I quit for 4 years once before in my life - the day Bill Clinton was elected President (first term) was my first quit date. I quit for four years then too. Then on one night in one fit of one bit of frustration and anger, I grabbed a pack out of a cigarette machine (they were always close at hand back then, weren't they?) and lit up. Smokers are such addicts: I can quit again--I am good at quitting.

So imagine my surprise today when I was trying to find out why my car charger wasn't working for my phone, and I pulled out the little drawer at the bottom of my console that I never use, and there they were: an unopened pack of American Spirits - my brand, my old friend, right there--came back to see if I still cared.

The pack was in there because the last time George went down to see his mother, during her final days, he took the van. He quit a year ago August. That was one of his last packs - and he's always wondered what happened to it.

The first thing I did after staring for a Very Long Time was smell the pack. Cellophane sealed, I could still smell its sexy scent. Yes, even now, it smelled THAT good. Next I put them on top of the dashboard and drove to the pool, because that's where we were going when I found them.

When you smoke, you are always doing more than one thing at a time. Every time you light up you are smoking AND thinking, walking, breathing, sitting, talking, pacing, driving, writing, drinking, whatever. Usually you are doing several things at once. That's what stimulants do best--let you multi-task and enjoy the rush of it.

Losing the ability to escape the perplexing LENGTH of a single moment is perhaps my biggest loss in giving up cigarettes.

There must be some joy to be found in those seem-to-last-forever-moments -- another stretch of highway, another commercial, another bill collector, another Zoom episode, another press release, another Web site. There must be something people enjoy about being present inside of those tick-tock-ticks of time. For me, it is extra time to be anxious.

I've got a long way to go, friends.

I've gotten better over the years. Moments aren't exactly something to escape anymore. I'm mostly present during them. I have stopped running in between the tick of the clock. Somehow I think that's good, although I'm not sure it will ever feel normal.

I didn't have one. And I didn't bring them home. I left them with a friend at the pool who still smokes. Someone I wouldn't be tempted to ask for one, because I thought about it. I sure did. Four years later I could have easily blown it by telling myself some story about how Good I Am At Quitting.

Like always, this blog is part of what keeps me honest and accountable -- to me as much as to you. It's not so different as I head toward four years than it was after six months, and my sentiments--they're pretty much the same:

This blog helped keep me honest. Honestly. There were times I thought about it. Seriously. George's cigarettes are in the garage right now. I could easily have grabbed one during one of my "moments." One of the thoughts during those "moments" was that I would have to post it. I would. I wouldn't not post if if I cheated. I would tell you all that I slipped up, and how good it was, but how bad it feels to have to turn the clock back, and you would all tell me that everyone has a slip up and it doesn't mean I've lost the battle--or lost respect--to just pick up where I was before the slipup, and I would say thank you, I love you guys, and to be honest, I wanted to avoid that WHOLE thing.

Jenna, if you ever read this post, please don't EVER light one of those disgusting cigarettes. It's not just that they're bad for you. It's that they don't let you go. They cuff your hands and mess with your head, and all of your internal organs too, as long as you live. Which won't be as long as you would have. And even if you quit, they never stop messing with you.

Really. Thanks to you all for helping me get here. And pat me on the back and give a shout out to God for the help. Slowly, very slowly, I've used those moments I used to use to escape to connect in new ways to new people and new energy. And I don't mean that in a woo-woo way. I mean that in an ah-ha way.

Labels: no no no don't do it, not smoking, to smoke or not to smoke

The big diseases have faces. The big organs have faces. Your heart, your kidney, your lungs, even your breasts -- they're the Big News body parts.

Pancreatic cancer is a disease without a face. That's because, as Randy Pausch says, no one lives long enough to become the face of that disease.

Randy was diagnosed with pancreatic cancer almost 2 years ago. It is a rare for anyone with pancreatic cancer to live as long as Randy has. Most -- like my father -- die within six months. The five year survival rate is around 3 or 4 percent. Even 40 years after my father's death, the prognosis is the same. No other cancer has been as elusive or remained as aggressive over the decades.

I found Randy's story because reading Doc Searl's posts about his pancreatitis battle, and Suzi's blog about hers, reminded me of the pancreas' tricky stubborn ways. Doc and Suzi don't have pancreatic cancer, but they do have bum pancreases. As I read of their latest challenges, I searched around to see how things were progressing with that odd organ and came across Randy's blog, his Carnegie Mellon "last lecture," which has become a book, and his recent testimony before the Health and Human Services Subcommittee:

Please watch it, and give what you can to PANCAN or the Lustgarten Foundation.
Posted by Jeneane Sessum at 10:06 PM 1 comment:

Meanwhile, I'd offer to take some of doc's extra morphine, but last time i had that shit in the hospital they had to stop me from itching my back raw with my dinner fork.