And thanks for all the laffs

Of all the tributes to Chris Locke so far, Steve Larsen’s comes closest to capturing the Chris/RageBoy I knew. It’s so good I keep returning to it. Steve knows what it was to experience being hit with idea bullets from Chris’ machine-gun brain, and then riff and co-create the next world-bending or stupidly hysterical (but always catchy) concept. To be one of his co-imaginators of meaningful and meaningless things was a gift I will take forward with me always. When someone truly informs your voice, that’s what happens.

The last exchange I had with Kat Herding/Chris Locke was a chat shortly before he was hospitalized. I was trying to encapsulate how his obsession with infectious disease disaster movies was another example of how he’s always ahead of his time, given our current global, viral predicament.

So, I called him “Pre-relevant”.

“PRE-RELEVANT LOL!! Made me laff more than once!”

I can’t think of a better final exchange.

Two pieces of Steve’s tribute are ways of describing Chris and RageBoy that I could not have said better myself if I tried for the next 20 years:

First, what the ride of being his friend was like:

“How can I tell you about that conversation/monologue? Mix up a vat of hard information, coffee dregs, healthy contempt, real world pragmatism, mashed Toxico cigarette butts, visionary eloquence, trailing-off-in-the-haze 60s enthusiasms, pure rage, a sense of mission, Thirteen Ways of Saying Fuck It, a highly-tuned bullshit detector with wires and lights and everything, democratic zeal, arcane rock and roll, a dollop of Howl, a cloud of menthol smoke and a driver with his head in and out of the window, trying to breathe, at ninety or so, bearing down on the Hanging Gardens of Newark”

And second, what it was like for him to get off the ride:

“If Chris had a problem, and this is just my opinion, it was this:  given the brain space and time spent in the future, a place he needed to go, sometimes arriving back in the here and now was difficult and disconcerting.  In his trips to the future, Chris figured out a great many things. He had a clear picture of how certain things would be, what would continue to exist and work, and what things would be discarded.  He used these insights to formulate ideas, products, services, and life in general to describe what life in the future might look like and how it would work. When Chris ‘came back to earth,’ he was troubled to see things around he’s discarded in his head as ‘dead men walking,’ and learned he couldn’t do some things he wanted as they hadn’t been invented yet.”

Pre-relevant. That’s our guy. And it’s only an iota of his legacy. Just wait and see.

Addendum: My estimate is that Cluetrain and Gonzo were 25 years ahead of schedule. Somewhere in the back of Chris’ brain there was an intricate choreography between the power of connected hearts to cut off capitalism and oppression at the knees, and his obsession with deadly viruses and narcissism. All we needed was one well-placed disaster to set off the powder keg. Here we are folks! 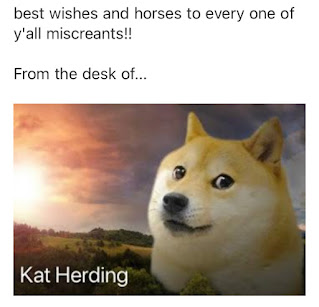