Posted by Jeneane Sessum at 3:06 PM

Posted by Jeneane Sessum at 9:24 AM

Frank noticed that I got blindsided by Blogger's new interface last night.

Boing Boing said yahoo to the changes. I say, WTF? I love Ev. No one's more of a blogger advocate than I am. Seriously. But I don't get it.

The rounded corners seen throughout the Blogger redesign (and in several of the user templates) make use of an expansion of the Sliding Doors technique written for A List Apart last year. The Blogger design is a fixed width, which means most of the modules of the site exist at pre-defined widths. Since the width of each module is known, one image is used for the top-left and top-right corners of a module, and another image is used for the bottom-left and bottom-right corners. The images are called in as background images for two nested elements. Since these two elements contain all the text of the module, they expand infinitely as the module grows in height. Think of it as Sliding Doors turned on their sides.

I don't care about rounded corners, nested images or sliding doors. I care about blogging. That's writing, with a few bells and whistles. Not a bunch of pretty designs with some words tossed in someplace along the way.

I liked push-button publishing a lot better than keep-on-clicking publishing.

Posted by Jeneane Sessum at 10:37 PM No comments:

Because I can smell it. I can always smell it.

A shark, a whisp of blood, and an unprotected flank. The rest is up to us.

Screw campaign blogging. The weather's right for a take down.

Stay tuned.
Posted by Jeneane Sessum at 11:22 PM No comments:

Hold the Presses--Bush on Skin Color: "Darkies Aren't As Stupid As Everyone Thinks"

Stupid is as stupid does, and Bush is so fucking stupid.

Noticed Cheney showed his ghost face today. Here's why--His old buddy put his foot in his mouth again, so Cheney did his Robin to Batman thing and showed up in tights to defend Rumsfeld, all the while hoping not a soul in the universe will notice that The Leader of the Free World said:

And the Prime Minister -- I don't want to put words in his mouth -- but I think he shares that great sense of optimism and possibility. And it's good to have a friend who shares that with us.

Would you like to have the First Ladies come on up?

Well, I would like to throw up, does that count?

Let's run this one down again: "I believe that people whose skins aren't necessarily (would say white but he can't string that many words together) -- are a different color than white can self-govern.

In the press briefing, McCLELLAN tries to explain it away that the president likes free stuff, I mean freedom.

Let me translate it:

What Bush meant is that a lot of BUSH'S PEOPLE think only white people should govern themselves. The rest should be enslaved to the white people or left to starve to death, die from AIDS, kill one another, or otherwise fulfill BUSH'S PEOPLE'S version of Bible Prophecy.

Posted by Jeneane Sessum at 10:50 PM No comments:

Posted by Jeneane Sessum at 10:19 PM No comments:

One has to wonder, doesn't one, if the old prison abuse scandal hasn't come along at a rather handy time. Sure takes the Bush DADministration's (and the media's) minds off of Sudan. 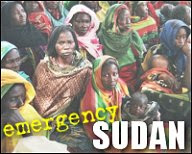 It's big people. Bigger even than a prisoner on a leash:

More than one million Sudanese have been displaced and as many as one thousand people are dying each week in Darfur, where government-backed Arab-Muslim militias are fighting non-Arab Muslim farmers and villagers. Although the U.N. Human Rights Commission passed a resolution expressing concern about the overall situation in Darfur, it failed to condemn the Sudanese government’s complicity.

Read the plea on the Doctors without Borders website.

Despite announcements of forthcoming aid, assistance is utterly inadequate. Mobilization of aid efforts is slow and the few organizations operating in Darfur cannot meet the full range of needs. As a result, few of the estimated 600,000-800,000 people displaced by violence in Darfur are receiving food assistance. Furthermore, shelters and drinking water are in very short supply and access to medical care is extremely limited.

I hear echos of I'm sorry's from the U.S. government. Do what you please and ask forgiveness later. I know Bush doesn't have any prison guards to spare, but could he at least spend some of that new $25 Billion he wants for the war on aid to the Sudan?

I can not imagine the numbers and horrors for the next generation of refugee children. If any of them are lucky enough to make it out alive.

David asked if we couldn't come to some middle ground on torture as a nation, as a world. I would ask the same thing about Genocide.

Posted by Jeneane Sessum at 9:43 PM No comments:

Did we ASK you to mess up the UI?

Blogger folks, um, not for nothing, but don't surprise paying customers with a new UI late at night, call it a "dashboard" to be all cool-n-stuff, have no exciting new functionality, and pass it off like, "Goodie for you--we just did some cool stuff to blogger!"

It's not cool. It's goofy. And it's slow. Let us have the option of using the old UI.

thank you.
sheesh--like we don't have enough problems.
Posted by Jeneane Sessum at 9:40 PM No comments:

What the Fuck Did they Just Do to Blogger??

Hey, Gimme my old user interface back!!!!!
Posted by Jeneane Sessum at 9:39 PM No comments: