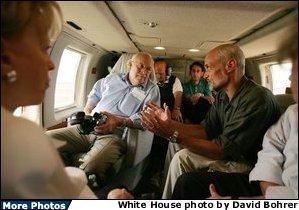 The first thing is Cheney and his name Dick. Because lately, say the last two years during which they've been keeping him basically hidden because they know W.'s not long for this world if he keeps fucking up -- especially now that he has entire cities after his ass -- but the thing with DICK Cheney is that he walks around like he's got this big package going on in his pants. I mean he does that tuck-his-chin-down and swagger, all John Wayne like, and he wears these pleated pants as if he needs a lot of extra room, and all I'm saying is that he is trying to exude the testosterone that W. so desparately lacks, falling off bikes and things like that.

But what I was really trying to get at is what the hell is wrong with this Chertoff guy? I mean--okay I'm not trying to sound disrespectful to any illness that might make you look like Ghandi, really--but so what the fuck terminal illness does this guy have, and why do you make someone who's busy making peace with is maker the director of the office that's supposed to keep us safe if a suicide nuker lands in NYC?

I'm not sure I understand anything anymore.
Posted by Jeneane Sessum at 1:47 AM