If we are to make exceptions for the technology not yet being in place when tracing blogging's origins, which I don't entirely agree we should do, then lets look for voices that live a road or two off the beaten path, huh?

Why don't I entirely agree that anyone before blogging can be classified as a blogger? Because blogging is new. Story telling is old. Linkage and networks matter and make blogging different. New. That's why I think you can't plug old round pegs into new square holes.

Voice, however, is another matter. Voice, perhaps, is older than we are. What was there before us? Sound. And if you believe in God, then Voice. So if you look into the origins of blogging through voice, then I'm with you. But through American literature? I say zzzzzzzzzzzzzzzzzzzzzzz.

So, if we allow for early journaling as voice to fit into the genesis of blogging, then I say Griff was more our blog grandpa than Emerson and the likes of his abrasively-introspective man-heroes of American literature.

Blogging is bottom up. Blogging is the sound of the quieter voices wired with mega amps of power.

Blogging is a Navy combat artist painting and writing from a World War II destroyer ship in 1941. 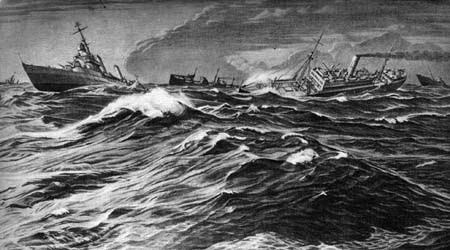 Griff along with his work of art and journaling have been brought to the net by grandson Gordon Coale at Grey Matter. An artist and I think a gifted story teller born in 1890, Griff's chronicle of the war in pictures and words are moving, compelling, and something I've just begun to explore. I'm so jazzed by what I hear and see:

A black night. The dim shapes of the officers with their binoculars peering through the small round ports of the wheel house. Men with head-phones. The dark loom of the watch on the bridge wings. All hands at their stations, competent, alert. "She is up and down, Sir." The slight throb of the powerful engines, and we lean gray wolves steal stealthily out in single file to the secret meeting with the oncoming almost helpless flock. The black loom of the hills of Newfoundland diminish into the obscurity of the night. "Secure anchors for sea." And with the first roll of the northern ocean, we feel that sensitive, live movement known only to men who have been in "Tin Cans", the Navy's nickname for destroyers.

That, my friends, is a voice I'd put on my blogroll any day of the week.

That is a blogger armed with simply a paint brush and a pen. And voice.

And a grandson who gets it.
Posted by Jeneane Sessum at 9:12 PM