Fuck You, Bush. You Fucktard. 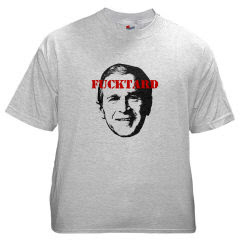 For the rest of us... some things to read.

Live online where you will find communities of smart people.

David does language. Weinberger/AKMA in 2008.

democrat.com on the fascist motherfuckers in power.

The Rich, Dumb, and Faithful Re-elect Bush: "As Senator John F. Kerry prepared his concession speech Wednesday morning, it became clear that the rich got in bed with the dumb and the faithful to deliver power over every branch of the United States government to a corrupt Republican Party that will do anything, including steal votes and lie, to gain and hold political power."

InterimTom: "Part of the mystery of strongly divided elections is understanding how anyone can vote for the other guy. Part of the reality check USians will face is, how realistic is the rhetoric of healing and union that new-waveian solutions spout with such facility?"

Not. And thank God.

And for every blog pundit online calling for cooperation and civil discourse, an end to disagreements, and a need for pledges among bloggers and citizens to unite us, I say:

You want a mandate of unbiased blather, go get your journalism degree and write for print, kay?

And while you're at it, take your bastions of morality with you--Bill Adulterer O'Reilly and Rush Drug-Addict Limbaugh. Save a seat at media training camp for George DUI Bush. They could all use a refresher course.

Unite this, you sack of hypocrites.