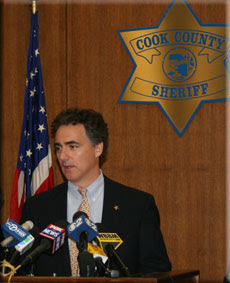 An American Hero in the War on Economic Terror

CHICAGO (AP) - Residents of foreclosed properties in Chicago and other parts of Cook County don't have to worry about deputies forcing them out. Sheriff Tom Dart says that starting Thursday his office won't take part in evictions.

Dart says he's concerned that many of the people being evicted are renters who were unaware that their landlords have been failing to pay their mortgages. He says his deputies have no way of knowing whether they're removing someone who has defaulted on a loan or someone who has been faithfully paying rent.

Dart says he thinks he's the first sheriff in a major metropolitan area to stop such evictions during the ongoing foreclosure crisis.

Well, that's not Sheriff Dart in your photo, but the story is worth repeating ... great stuff!
http://lifeisacookie.wordpress.com/2008/10/09/hero/

Thank you for the correction - and the link to your post! I fixed the photo of Sheriff Dart - LOOKIE HIM!

PLEASE PLEASE PLEASE SAY THANK YOU TO SHERIFF DART FOR BEING THE ONLY ONE OF THE FEW TO STAND UP TO WASHINGTON AND THE GLOBAL BANKERS!