Lay down with a child

I forgot i ever wrote this, but then i remembered...

lay down with a child

Lay down with a child; watch them let go of the day.

Listen to her stories, to her final fury of lucid thoughts before she gives in to sleep; listen to her questions, always profound at this time of the night, about God and oceans, about life and death, about how she’ll never be 90 years old.

Be quiet and listen to her. Sketch her face with your eyes as she stares out the window at the stars from the universe that is her covers. Follow her breath with your own, in and out, and wait for the moment when she releases the day.

Then rest there longer. Let her dreams climb into yours, feel the softness of her small hands, and feel so blessed for that moment, ache for everyone who has had it and lost it, and realize that sadness will one day be yours, when you don’t have her night times anymore.

Touch her hair, brush her cheek gently, and kiss her softly as you rise.

Posted in Prose, Remembering, My Child | No Comments »

Posted by Jeneane Sessum at 8:23 PM No comments:

Elithea and AKMA said so

AKMA today announced he is going back to Blogaria—a way to redecorate the web, take back territory from trolls, and reduce time on social “networks” infested by bad actors. And I don’t mean Sylvester Stallone.

So I thought I’d see what it’s like to post from the old iPhone. And what better than showing off one of the three things I appear to be sufficient at growing. Potatoes. 🥔

Here is my latest haul. 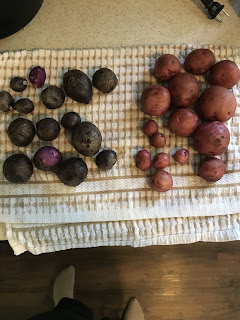 You may be amazed that I grew two varieties. Like you, I’m skeptical of the purple ones. How do I know if a potato that doesn’t look like a potato is okay to eat?

I thought back to how my mother made potatoes, before microwaves, and remembered that everyone boiled potatoes. As I looked at the weird skin on the purple potatoes, I decided just to be safe, I’d take the skin off and boil them. Honestly? They taste just like the red ones, so next year I’m skipping the purple and the peeling and the boiling.

Now the red ones are interesting. I really thought my potatoes would taste special. Soil to table. I used organic fertilizer. I grew them in containers. I watered them lovingly. And they grew well.

But you know what? Unlike strawberries and peppers (the only two other foods I seem to be able to grow), which tasted way better than store-bought versions, the red potatoes I grew taste exactly like potatoes. No more no less. Not sweet not dull. Just potatoes.

I’m not complaining. I’m glad something grew out of my steroid-induced patio container garden that my frustration with some Tragically Really Unbelievable Malicious People made me plant.

This way, I am prepared for the coming undoing—at least once I learn how to grow tofu. Or soybeans. Or something with protein. Because I’m not raising cows. And our chickens are all dead now. 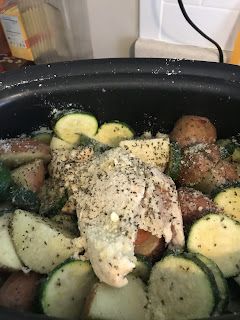 So, after some time away, this catches us up for now. Dinner is in the crockpot. No that is not one of our chickens. The opossums or raccoons got them.


I guess my blogroll is going to need some attending to.

I feel like this is so old-school that I should go chop some wood.

Do what you can to #resist.

Posted by Jeneane Sessum at 1:47 PM No comments:

This blog has been the frying pan for my thoughts for a long time now, going on 17 years. That's through GW Bush's administration, Obama's cool 8 years, and now this nightmare: Trump and the alt-right. I look back on how irate we were at "W," at 911, at the warbloggers who took "the war on terror" as their rallying cry to hate anything peace loving. The warbloggers were the genesis of today's Trump base. Ask-no-questions, flag-waving, globe-hating war enthusiasts that suddenly had a platform for hating anyone outside of our  boarders.

Today the warbloggers have come home to roost. They have their President. He has his nukes. And it feels like all the passion and resisting we did back then made not a bit of difference. Maybe we got complacent during Obama, a President that tried to be on the side of the people, or most people. Maybe there is no winning for the good guys in a country with a legacy such as this.
Posted by Jeneane Sessum at 6:00 PM No comments:

The Alt-Rogue vs the Alt-Right

I don’t know about you, but I could use a little less excitement.

In the recent 2016 U.S. election of Donald Trump, a concerted and strategic social media arsenal was unleashed, one that the Democrats seem to have been wholly unprepared for.

How is that? While we (yes I’m one) were busy laughing at people who watch Fox News, a “network” whose news stories and celebrity-talking-heads have been debunked time and time again, the last laugh was on us.

The new white house itself is proud of its reliance on “alternative facts,” which — although Twitter has had a ball with the notion — is scary as shit.

Many of us original bloggers (Y2K here) remember when Ev Williams started Blogger and began self-publishing around that time. When Ev started Twitter, I don’t think any one of us ever saw the future: A POTUS spreading fallacies and threats and rumors, and then drawing dangerous lines in the sand with enemies and allies alike, all in 140 characters or less.

How did a medium that once was, if anything, super honest and highly personal — with early bloggers and twitter users making themselves vulnerable and human in sharing from the gut — become a channel for hate, hyperbole and falsehoods?

The medium isn’t the message, folks. The messengers are.

In this case, the alt-right’s Bannon and company ran a brilliantly strategic social media campaign, complete with a literal paid island of young people manufacturing a digital arsenal of fake new stories that made them rich, along with paid trolls posted at every corner of every comment section that mattered.

Bannon thought of that. We didn’t.

Because at our core, liberals and progressives believe that no one would believe it, that people are intelligent enough to distinguish hyperbole and alternate facts from truth, and that in the end, we should believe the best about our fellow man, and that love should trump hate.

Boy were we wrong. DEAD wrong.

So, how should we take back social media? Can we? What would it take? Do we have to fight “fire with fire,” as Trump said last week about national security?

While I’m glad we are building an army of comedians like Alec Baldwin and the SNL cast, who is building our army of truth-tellers that can deprogram and sway a public that has already been captured by an army of trolls?

When the National Parks twitter users were silenced by federal order, some brave rangers went rogue and launched their own “AltUSNatParkService” handle. Scientists (@ScienceMarchDC) who have been directed to run all findings through the new administration before publishing them have followed suit with a planned march on Washington and bevy of rogue twitter handles of their own.

Suddenly the Alt-ROGUE movement is rising up against the Alt-Right movement.

This week – I see it as our best hope.

But we’ll need more. A lot more.
Posted by Jeneane Sessum at 5:50 PM No comments:

Had my first try at a long-form linkedin post today. we waited 13 years and blogging came right back around.

Posted by Jeneane Sessum at 5:35 PM No comments: