Named by Matchstick as one of Atlanta's 50 Most Influential Women 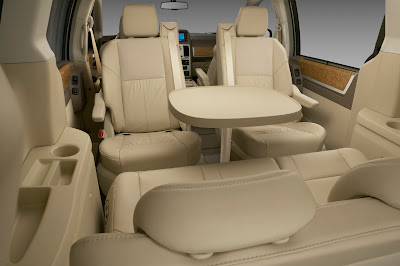 The valet guys from Eagle Parking showed up with the shiny new dark blue Caravan (which Jenna continues to pronounce Car-Van) -- essentially a minivan on steroids -- at about 2:30. I wish someone would have tipped me off about the picture taking as I MIGHT have showered or at least worn a less ratty t-shirt, as if I own any.

The valet team was very courteous and somewhat knowledgeable. They showed us where all the bells and whistles were in the van, which BTW are enough to make any child silent for a day-long (at least) road trip. I was glad I caught the guys before they left the driveway, because I noticed I couldn't get any actual SOUND through the Satellite TV, the Satellite radio, the DVD, the CD, or regular FM radio. Disney Channel and Cartoon Network played on the THREE screens (counting the driver's), but the speakers weren't working.

Really no point in having a TV on wheels if you have no sound.

They spent about 40 minutes trying to figure out why the heck there was no sound, including a call back to the marketing company running the program. They called me personally -- I have to say they were respectful and open to my ideas on how to fix the situation. My best idea was something like: I want the sound to work.

One of the guys got the idea to do a ctrl+alt+del on the whole van. He disconnected then reconnected the battery. I used to have to do that to my Dell, but my Dell didn't have any wheels or airbags. That's one reason I went back to Mac. But I digress. But what do you know, it worked--we had sound!

We whooped and hollered because by now I'm punch-drunk with the excitement of this not-my-new-car and Jenna is home from school and drewling over the lean-back seats, the table and swivel chairs, the satellite TV and radio, the wireless headphones, the remote, and on and on and on.

So child feedback so far is that the car would be perfect if it had a shower, a refrigerator, a dance floor, and a hot tub.

Adult drivers (one mom, one dad) so far weigh in with differing favorites. Mom-friend-#1 loved the front windshield, which gives the illusion or reality of being able to see in surround vision--like, no blind spots. I like the driveway cam that shows you what you're about to run over in the stealth-green-night-vision-commando video display on the dash. And how roomy it is. And how quiet it is to drive. And that it came with a full tank of gas and my chevyventurevaluevan was on E.

One friend's dad gave it a spin with us - he was surprised by the pickup -- it's got power -- and liked the navigation features. He was transfixed on the GPS POIs - points of interest -- whereby the GPS lady tells you how to get to all the cool places you've already been to but it's nice to know she's with you anyway. That's the feature for people with abandonment issues. I think it's standard in the U.S.

The kids asked if they could have a sleepover in the garage before we have to give the car back. I thought that might not be a good idea, but did offer to drive everyone to basketball practice tomorrow.

Dodge Grand Caravan, Matchstick, Marketing, Advertising, Blogging, Test Drive Program, Moms on Wheels, Computer on Wheels, Pry It Away From Me I Dare You, Free Rental
Posted by Jeneane Sessum at 9:29 PM

Labels: look at not my new car, watch me go, you can't have it back