It could be a blue one--does it matter?

I've put a lid on the hamster co-dependence thing for tonight. Instead I've been thinking about blogging--for which I've developed a nasty disliking lately, despite the obvious. That obvious being that I'm writing in a user interface right now developed by blogger.com, which essentially means I am blogging. I think so anyway.

Some reporter bloggers' stories come from mainstream media. Some come from other bloggers. But reporter bloggers--who often fancy themselves journalists--write about and link to OTHER PEOPLE'S stories much of the time; i.e., stories they did not write.

Story telling bloggers spend the greater part of their blogging writing original stories--of a day, of a moment, of a death, a life, a cheese sandwich for lunch. The majority of story teller bloggers' posts tell stories rather than alerting readers of a story that has told itself elsewhere.

As with all things blogging, there are exceptions/hybrids/rule-breakers/convergences/cross-pollination taking place between blogging reporters and story tellers.

These electric places of EXTREME overlap or EXTREME dissonance are the where innovation takes place, those exchanges, those posts, those weblogs that move us forward into new territory.

What does this have to do with a red umbrella?

Well, I wasn't thinking any of what I just wrote until five minutes ago.

I thought about what I wanted to explore in this post--not politics/journalism/gender-wars/tech/biz/pr-marcom theorizing. I wanted to write about something. To tell a story.

With no ideas nearby, I closed my eyes, opened my mind, and snapped a picture of the first flash revealed. 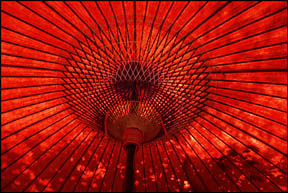 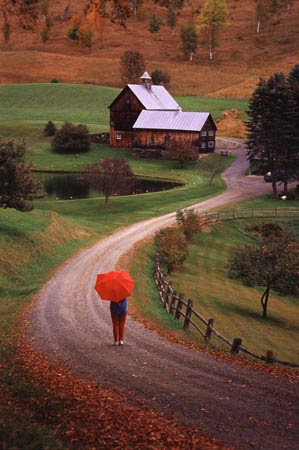 In common these things have movement.

In movement these things have meaning.

Under cover we make meaning or seem to. And yet, how fleeting is that sense that we work so hard to make when a single updraft shucks the red umbrella like an ear of late summer corn, or rips it from an uncommitted hand.

I found out today about a friend who lost her lover who was a friend before her lover.

In that moment of her telling, in a flash of pain, a flash I did not recognize until I sat down to write about these things here, was the red umbrella.

Simple in its elegance, posturing as protection, fighting against its own beauty, there is no mix of form and function that keeps us safe enough.

Certainly not the red umbrella.

Certainly not tonight.
Posted by Jeneane Sessum at 12:07 AM