We got sad news last night that jazz guitarist (and friend) Mark Manetta died. Far too soon. George would be the one to speak best about Mark as a friend and fellow musician--he played with Mark a lot during the decade+ the two were in Rochester. You'll probably know Mark best from his work as the guitarist on many of Chuck Mangione's recordings. He also played with Ben Vereen, the Rochester and Buffalo Philharmonic Orchestras, and many others.

Mark taught and/or influenced dozens of the gifted guitarists who've come out of Rochester. Even with all the reasons I'm glad I don't live there anymore, Rochester, NY has the most dense population of truly talented jazz artists (especially guitarists, followed by sax and trumpet) of any small- to mid-size city in the U.S. (and a lot of the big cities too).

That's in part because of the Eastman School of Music, and part because the musical DNA of the jazz players in that little patch of the world has somehow intertwined to create a unique sound --and some legends. The guitarists who are Rochester taught have a special sound. You'll notice it most on ballads. They aren't afraid to cry for you. Part of that sound is undeniably Mark Manetta's.

It's been 12 years since I've seen Mark, but he always felt like family to me. He reminded me of my Uncle Tony, with his booming voice, those bright eyes, and big hug. Never mind the curls.

I feel really blessed to have travelled the outer edges of that musical circle for as long as I did.

And I feel really sad when I think of Mark's guitar sitting in its stand right now lonely for his hands. 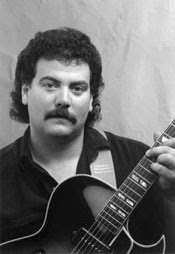 Mark wrote the following on a Joe Pass memorial site: Thanks Joe, I'll never forget what you did for me. I know God was waiting for you in heaven. Don't show him all the chords untill I get there!