One cool thing about blogging is that we become seen as experts on stuff that we're not.

One scary thing about blogging is that we become seen as experts on stuff that we're not.

Thanks, Google. I remember the time a man emailed me from Europe because his daughter was in the hospital. He wanted me to know that he found my writings about Jenna's Strep Throat and how I could usually tell it was strep by her strawberry tongue. Strawberry tongue is self-explanatory if you've never seen it. If you have seen it, you know what I'm talking about.

Anyway, this father who had googled my writing about strep wanted to let me know about Kawasaki disease - a rarer-than-strep and often more-serious-than-strep illness that is also frequently accompanied by a strawberry tongue (among other symptoms). The man who wrote wanted me to know that strawberry tongue does not always mean strep--it can be part and parcel of many illnesses, including Kawasaki Disease. Why is this important? Because a delayed diagnosis of Kawasaki's can lead to permanent heart damage, even death.

That's one example of how my sorta-knowledge had realworld impact by NOT being the expertise Google had suggested.

Another example is from today. Luckily I'm a bit more qualified for this one.

Today I got a voice mail from Hamster Guy - HI! - I forgot his name. He was asking about hamster weaning. First, Hamster Guy, let me say congratulations on the new members of your family. (HAHAHAHAH!) 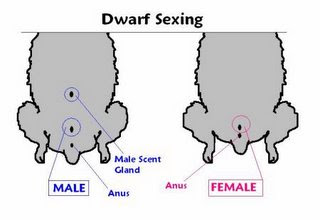 Now, as far as weaning goes, you'll see the little kids start leaving the nest in about 10 days. They can't really do anything much but slug themselves around with their big heads. This goes on for a couple of weeks until they look like real hamsters, but smaller. Between 3-4 weeks old you can separate them from the mom. There's a whole other ballgame involved in telling the sexes apart, and you don't want to mess that up or you'll have more hamsters on your hands. Allow me to include a helpful diagram for the hamster sex newbie.

It took me about two weeks after weaning for me to find homes for most all of them. We still have one - the runt - and the two parents. It's a royal pain in the ass because they're Syrian hamsters and they will fight bloody as adults, so we have 3 separate cages that need to be CLEANED and WATERED and so on. There are lots of good hamster sites. Which in itself is amazing.

I'm sorry I didn't call you back Hamster Guy--my cellphone is in the car, and I just remembered your message. I hope this helps. Have fun with the babies.

Don't bring any over here.

This cracks me up, Jeneane...you are the blogosphere's resident hamster expert!