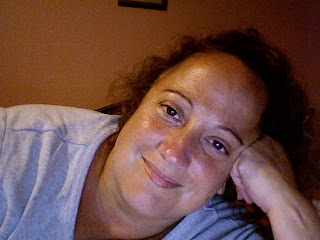 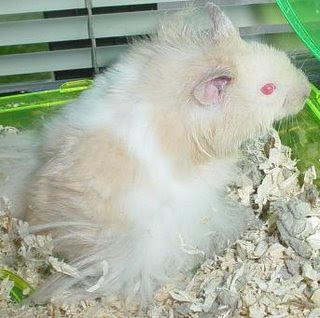 max in his younger days.
"I sure hope she's pregnant."

An odd thing for George to be saying when he walked into the bedroom at about 1 a.m.

That's how I came to learn that our elderhamster Max, AKA Marshmallow, loving husband to Cupcake and the longest living hamster in show business, had been Promoted to Glory as they are known say in The Salvation Army.

It was bound to happen. He had far surpassed the average hamster lifespan of 2-3 years, survived innumerable stupid hamster tricks and a lengthy marriage to his first wife, Coco, who ate their 13 babies back in 2005 after I mistakenly separated mom from babies. He was also the sweetest hamster we've ever had, and father of all hamsters we've ever had, except for his two wives.

I think of Coco, who died last year on Halloween, and the birth of their first litter of babies, spitting like popcorn from the hamster wheel. I think back on when I tried to figure out what to tell Jenna and opted for the truth.

She heard us talking tonight and already knows about Max. She's glad it's not the cat. A story for another day.

Recently we could tell that Max was aging fast, and that's when George came up with the idea to get him a new mate in Cupcake. We did a trial run with them in the same cage a month ago, but no babies. We put them back together a couple of weeks ago, so we're really hoping for some offspring to remember Max by.

Babies or not, Max you were a gentleman among hamsters. I'll miss you.

the be all end all of the weinberger v keen thang

Madame Levy summarizes it better than anyone i've seen. i LOLed five times. "mustard is a no go area for most people. trust me." oh man.

i hadn't been reading this stuff and now i don't have to. she's like the cliff notes for blogosphere dust ups. and she cleans fish tanks too.

what you need to know 2

Labels: I remember back in 1982 they stuck that thing so far up my ass i thought my brains would fall out...

This chat is off the record Learn more Cancel

me: what if a nut falls on my head?
madame: just act crazier than them. this always works.
me: ok thx
Posted by Jeneane Sessum at 3:49 PM No comments:

What a Wonderful Surprise!!

So Steve, a valued reader from the UK, did the nicest thing since my new mac, which you are not going to believe.

Steve saw my writing and wanting for the new Prince CD, Planet Earth, which is available so far only in the UK given the stroke of anti-establishment marketing genius from The Artist himself, and decided to send me a copy -- w00t!

In case you think he's trying to pull the wool over our eyes, dear friends, I give you exhibits A and B. HOW COOL IS THIS: 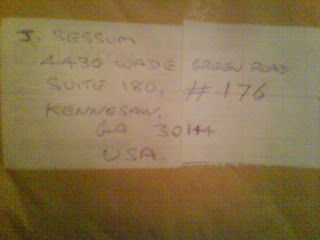 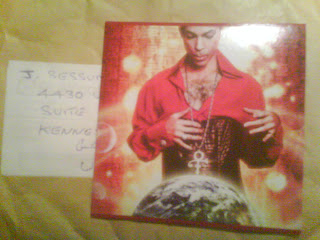 
Tonight I join Social Media Diva Toby Bloomberg on her new BlogTalk Radio Show. Toby, Wayne Hurlburt and I will be talking about social media ethics (yeah, i know!) trying to define what it mens, how and if bloggers differ from journalists in complying to rules/mores/norms, how much any of this matters and to whom, and more. A half hour isn't very long, but let's get the party started. Show notes are here. Wish me luck. The decisions we make in our 20s...
Originally uploaded by betsythedevine
i love that Betsy and Ronni keep taking us back in time. SO many of us spend our time online predicting things to come--it's nice to see the past join us, remember us. That's what makes this picture of Betsy in her 20s -- Pregnant and adorable -- so special.
Posted by Jeneane Sessum at 7:15 PM No comments:

with a little of this.