Rogers Cadenhead had an interesting post I'd missed quoting some fascinating illogic about interracial relationships and their threat to all that is white and good from vdare.com, a white is right unity group.

Breaking down the sexual barriers between the races is a major weapon of cultural destruction because it means the dissolution of the cultural boundaries that define breeding and the family and, ultimately, the transmission and survival of the culture itself.

Me? I see it a little differently:

Breaking down the barriers between humans is a major weapon against cultural isolationism, which encourages inbreeding and family dysfunction, and ultimately, the destruction of the culture itself.

Of course, I have a pretty biased perspective on this. I've been married to a black man for nearly 18 years, and together for nearly 20. So let's get something straight:

That's a long ass time, I don't care what color you are.

The funny thing is, that I actually agreed with what Sam wrote early on in the post. His premise was that the Monday Night Football incident with blond-towel-dropping and the Eagles definitely-not-white Terrell Owens, was constructed by marketing geniuses in part because Sheridan is a dumb, white, blonde, starved-for-sex American “Desperate Housewife,” and Owens is a muscular, black, younger-than-her, obviously-woman-fucking American athlete.

Yes, Sam, we’re on opposite sides, but that pissed me off too.

Now, Sam won’t link directly to anything that actually quotes Colts coach Dungy's on his opinion that the skit was purposely racially titillating, playing on long-standing stereotypes—and for that reason the coach found the opener offensive.

Sam won't quote Dungy because Sam doesn’t like niggers--unless they sit down and let White Identity rule Amerka like God meant before he sent a bunch of folks to drag the slaves over here.

But I like Dungy fine. So I’ll link to an article here, where the coach with the unfortunate name explains several things:

The ad reinforces the stereotype that a black man will do anything to get a blonde piece of ass.

The ad reinforces the stereotype that black athletes are good for two things: running from the po-lice and sex.

The ad reinforces the stereotype that black men think blondes are better in bed than brunettes (oh wait--I made that one up!)

The ad LEVERAGES the black-man-white-woman stereotype to create BUZZ for the purpose of driving BRAND awareness.

I have a distinct distaste for buzz. Brand awareness too. Oh, and racists. That'd be you, Sam.

The tiny little patch of earth where Sam Francis and I stand together is a patch being inhabited more and more frequently in these days of strong polar opinions and extremes. It is a uniting of two distinctly opposite sides to take on the mainstream--in this case, mainstream television, advertising, and BIG BUSINESS (aka ABC, Disney). It is a perverse meeting of two mindsets that disagree on virtually everything else -- but stand on the same soil when it comes to their perceived right or wrongness of a concept that is highly controversial.

I think the Monday Night Football prank represents the unacceptable greed and cultural ignorance of Big-B-Bidness.

I haven't figured out if this is a win-win, or a lose-lose.

Mostly I had fun playing with photoshop. 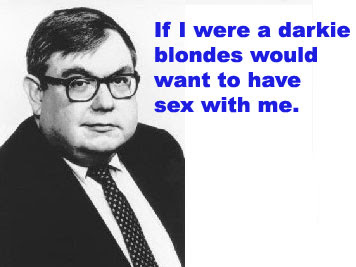