CoCo, Melanie, Where are you?

You know the pig has been gone. I told you all I called the EPA and Code Enforcement at the beginning of summer when my stupidass neighbor began dumping pig manure in the runoff-creek that borders our yard with our neighbor's yard, making for the most godawful smell you can imagine, unless you're from Iowa, and then you know what I mean. 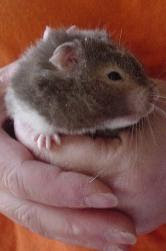 Well, add one more animal to the "where the hell did that pet end up?" list. It seems that the matriarch of our hamster family, Coco, renamed Melanie after she became a mother and ate 13 babies, is not to be found anywhere in this house. My sister was pet-sitting while we were away. Somehow the top door wasn't shut just right and she got out. That was about 10 days ago. No sigh of Melanie ever since.

Jenna has been beside herself. I even got her to clean her room by saying, well, maybe she's in here somewhere, but that backfired when she began having visions of the hamster "POPPING UP" in her bed at night and ended up sleeping next to me. "IT MIGHT POP UP!"

We've set traps, we've left out sweet baby carrots, and I hate to say it, but I dream about her every night. I think George has had two dreams about her. Last night in my dream she was as big as an infant and I was cradling her and she was glad to see me.

I won't say it, but the dog looks content.

I like you blog.Do you need acyclovir please visit my blog at acyclovir-online