Shelley wrote something the other day that is among the most important and wide-open challenges I've seen put to the blog community in a long time. Actually, she's written a million great things about weblogging, community, and voice lately. Look here, here, and here. Shelley does a good job, as always, of linking to those involved in the larger discussion to provide context and layering.

Within these posts, Shelley offered the challenge I'm talking about, a challenge that she didn't phrase as a challenge at all, mind you, but for those who take issue with what she wrote, it is a challenge--a substantial one.

And it's a challenge that anyone with too much riding on their success as a weblogger will never, ever accept, can't aknowleldge as valid, won't risk looking at. Because they can't afford to. They can't risk it. Instead, they'll project, they'll turn it around, they'll wag a finger.

"If community causes you to alter your writing—not to say something you think should be said, or to write a certain way to get attention—then you are betraying yourself as a writer."

And I would add: "You are a fucking coward. You are in hiding. You are afraid to be real."

Weighty accusations? No more so than those those accusations that have been leveled against Shelley, StavrosTWC, and Me in recent months by Liz Lawley and her band of merry maids.

Oooooh, jeneane, that's catty! That is negative. That "behavior" is beneath you.

I say that negativity, challenge, holding people accountable for what they say and do here is far more "benevolent" (see Liz's facination with the belevolence test) than castrating voice, silencing those who would challenge your ideas, throwing the guy with the broken leg under the bus so that he doesn't slow down the progress of you and your pack of she-wolves.

A benevolence test for bloggers? Are you kidding me? The only person I'd trust to administer that test is AKMA, and I trust him because I know he'd laugh at the notion of enforced benevolence. I know that he would see the irony in that.

I don't care about making friends here, forcing friendship, sacrificing who I am to have powerful friends in this space. I don't care that an a-lister leaves me a comment, and if he or she does, I don't consider that necessarily kind. I consider it part of a conversation.

DO YOU HEAR ME?

As someone who participates in this space, what I gain personally from a comment -- a-lister or otherwise -- is NOT important. THE IMPORTANT GAIN IS TO THE CONVERSATION, NOT TO ME and NOT TO YOU.

The gain should go to the community, not to your fame ranking or your resume.

You? You take the hits. That's your job here.

You take the fucking hits and you keep on going. You love. You Seeth. You Grieve. You write. The hits are yours to take, to grow from.

That power shit can't last here. Not for long anyway. And She and He and Me will keep talking about it and blowing things up. And those who have known us a very long time can judge for themselves who's being real and whether you want to light a fuse or run for cover.

It's about rolling in shit and getting dirty and wiping the crust from your eyes and going on. It's about being sewn up and busting your stiches from laughing so hard, even as the blood drips down your underwear. It's ugly. It's beautiful. It's real.

You can research, you can confer, you can pontificate, you can wag your finger at Shelley, at Stavros, at me.

Liz can take Halley to task without naming her because that wouldn't look nice-nice on Liz's comment-free webzine.

In this space, you can fool yourself.

But you can't fool us. 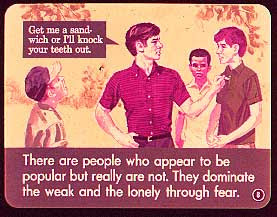