George has long been musing why they haven't shown a single body on all the TV coverage of the the death of the victims of Katrina. The same way it was distressing to see our dead soldiers and their dead enemies on TV during the Vietnam War, I think the Administration is more than a bit concerned that glimpses of bloated dead bodies of the elderly in their nursing home beds, or dead children in the superdome -- those who would be alive had the response been speedier -- might upset our delicate American constitution. Just like those coffins coming back from Iraq. Gets the natives all stirred up.

There will be mass graves for the unidentified. Get out of New Orleans, because we don't want you to see where we put them. Not all of those victims are hurricane victims. Half of them are potentially victims of broken processes, of failed leadership, of bureacracy and delay. Seeing several thousand bodies -- black and white, 90 year-old grandmas and 5-year-old rape victims -- whose delayed rescue ("No one's coming to get us."-- A. Broussard) caused their death might indeed outrage even conservative Americans.

And too many of you, my liberal friends, are buying the line you are being served: "It's NOT TIME TO LAY BLAME Yet. Now is the TIME TO HELP." Excuse me? How is uncovering the criminals and the crime not helping? Would you like the madness to continue just a little longer--long enough for you to get some of your old clothes to the shelter so you can wipe the guilt off of your white brow? It is PRECISELY the time to blame. PRECISELY the time to lay down accountability. PRECISELY the time to rise up in voice and in numbers and say Absolutely Not. Not Acceptable is what we say when we learn professional firefighters who wanted to help were sitting through a FEMA sexual harrasment class while the people they hoped to save were starving to death.

Don't buy their line. Don't buy the unity slogan from the White House PR department. Do not for one minute buy that line of bull. You blame them and you do it now and later. You have enough energy to go around. What, are you conserving? No, I don't think so. You pull THOSE people out of hiding at the federal and local level who did not AND ARE NOT CURRENTLY doing their jobs, you shine the light on them, and you set out to create a public record of undisputable evidence that mounts and mounts until it is so overwhelming that it can't be denied.

Or instead you can allow the Administration to continue business as usual, as with its order of "NO DEAD BODIES WILL BE SHOWN," and you can continue to not ask why.

Because you don't want to see them. And you don't want their relatives to see them. Because we wish it never happened. And if we don't see the bodies, then maybe it didn't, maybe it wasn't all that bad. Maybe everyone did the best they could. Maybe we should get on with it. Dr. Phil even says that you have to move on.

Tell the officers who committed suicide that trauma works that way.

And we don't need to see their bodies either. Because it's tough being traumatized. And we have to get up and go to work tomorrow. And the creditors haven't stopped calling.

And maybe next time the calvery stays home, they'll serve us up cartoon bodies, and we'll willingly accept them, because it's always cool when Wily Coyote springs back to life again after the roadrunner lays his house to ruin.

Because make believe is always so much better. 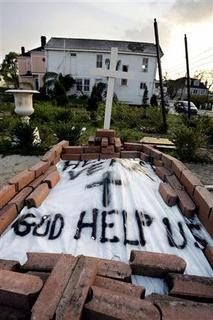 Posted by Jeneane Sessum at 9:40 PM