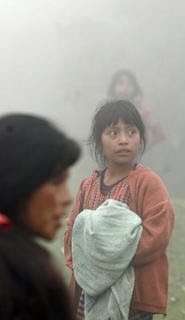 Tens of thousands of the poorest of the poor are now homeless and living outside. Entire villages are gone. Nearly 40 bridges are washed out. Roads have been destroyed making access to many areas impossible.

Mercy Corps is playing a lead role in orchestrating the relief efforts with Guatemala's government and other international aid agencies working in the country. Prior to this storm, Mercy Corps was already helping coordinate a program called the Disaster Preparedness Coordination Project, which is funded by the Bill & Melinda Gates Foundation.

There are more than 1,000 new orphans. Guatemala's attorney general Roberto Molina said the orphans would be placed with close relatives or put up for adoption. If red tape could be cut, we would open our home to a child today. I bet many caring people would.

In the mean time:

More on Global Voices.
Posted by Jeneane Sessum at 8:32 PM