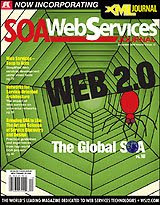 Dion Hinchcliffe has a pretty thorough wrapup of who's saying what about Web 2.0 - and lookie me among the boyz, in good company with Marc and Stowe:

If you take the temperature of the status quo, the inestimable Dave Winer currently has the mike with his Busted, Explained article, but numerous others have chimed in recently including quite famously Richard MacManus, who was then called out by Mike Arrington of TechCrunch, then Joshua Porter went on to explained why he still uses the term, ad infinitum. It was Russell Shaw however that was the one who really stirred the pot to considerable effect, but even he was then answered in kind by his very own Joe McKendrick. Folks like Stowe Boyd have come out about this latest Web 2.0 brouhaha very level headed, as have a number of others who seem to have some perspective including Marc Cantor, Jeneane Sessum, and Frederico Oliveira. Now Shaw has come back swinging and shows no sign of flagging in his attempt to assert that Web 2.0 has no clothes. An attempt almost certain to fail, I might add, though we'll probably make yet another trip around the blogosphere mulberry bush.

If Web 2.0's your bag, check out the post and related posts.